WASHINGTON, April 5 (Yonhap) -- The ballistic missile that North Korea fired Wednesday is believed to be a medium-range Scud ER, a U.S. defense official was quoted as saying.

"A Scud ER (extended range) flew about 60 kilometers before suffering an in-flight failure and crashing into" the East Sea, the official was quoted as saying by AFP.

The U.S. Pacific Command had earlier identified the missile as a medium-range KN-15. South Korea's Joint Chiefs of Staff also said it was believed to be "a type of KN-15," also known as Pukguksong-2, and the maximum altitude of its flight was 189 km.

Scud missiles are liquid fueled while the KN-15 use solid fuels, the report said.

The U.S. official was also quoted as saying the missile was fired from a "fixed site," not a mobile launcher.

Comment from the Defense Department was not immediately available. 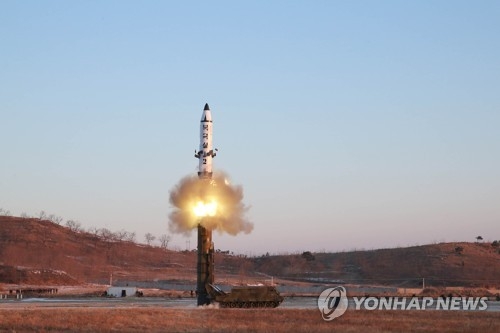