Wednesday night's premier broadcast of "Queen of Mystery" recorded a 11.2 percent nationwide viewership, according to Nielsen Korea. The rating for Seoul and its vicinity stood at 12.4 percent.

"Queen of Mystery" stars Kwon Sang-woo as Ha Wan-seung, an elite hard-boiled narcotics detective, who is as thorough as they come. His opposite is Choi Kang-hee, cast as Yoo Seol-ok, an unassuming neighborhood "ajumma," who is a natural-born genius crime solver.

Despite having no authority in law enforcement, Seol-ok constantly snoops around crime scenes to investigate pending cases, clashing with investigations led by Wan-seung. Though reluctant at first, Wan-seung accepts her talent as a genius and joins forces with her. 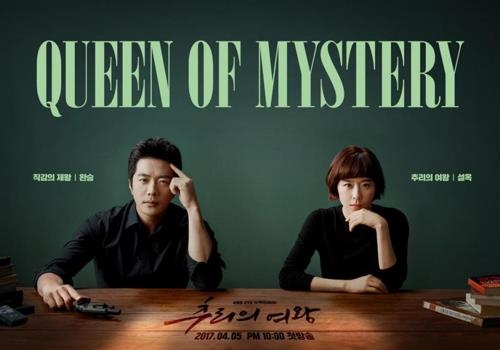 'Queen of Mystery' debuts at No. 1, 'Radiant Office' rises

'Queen of Mystery' debuts at No. 1, 'Radiant Office' rises