SEOUL, April 6 (Yonhap) -- Sales of clothes dryers have surged in South Korea, with demand to hit a new high this year amid concerns over air quality, industry sources said Thursday.

The domestic sales of the clothes drying machines are anticipated to reach around 500,000-600,000 units in 2016, up by at least fivefold from the previous year, according to industry data.

Its manufacturers, including Samsung Electronics Co. and LG Electronics Inc., have revised up the sales estimate from 200,000 units, since their first-quarter sales have far exceeded the previous forecast, they said.

Its March sales of clothes dryers grew by more than tenfold, compared with a year ago, it said.

A clothes dryer had been considered one of the last home appliances a consumer would buy in Korea, due to the long-held perception that laundry should be hung on racks to dry under sunlight.

But there has been a shift in the common belief, as a change in the climate stemming from seasonal fine dust and smog has sent hygiene-conscious consumers to scramble to install clothes dryers at home.

The growth in the number of working women in households also fueled demand for dryers that help them save time on daily chores.

"Clothes dryers are evolving to become a must-have item for households, as opposed to being something that only some people buy," an industry official said. "A boost in production of electrical dryers that are cheaper than gas ones also helped drive up the sales" 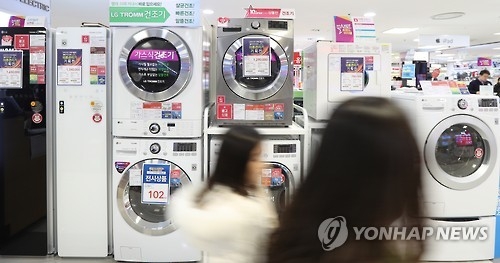