Citing preliminary assessments, the U.S. Pacific Command (PACOM) also said the projectile appears to be a KN-15 ballistic missile, which Pyongyang calls Pukguksong-2. Fired from a land-based facility in the port city of Sinpo, it flew nine minutes, added PACOM.

"I think 'medium range ballistic missile' is the most appropriate characterization for yesterday's missile launch," Cmdr. Dave Benham, a spokesman for PACOM, said in a brief email to Yonhap News Agency.

In another email later, he stressed that the PACOM's release was based on its "initial assessment."

"To my knowledge, a more detailed assessment is still being made, and no final determination has been made beyond the more general category of medium-range ballistic missile," he added. 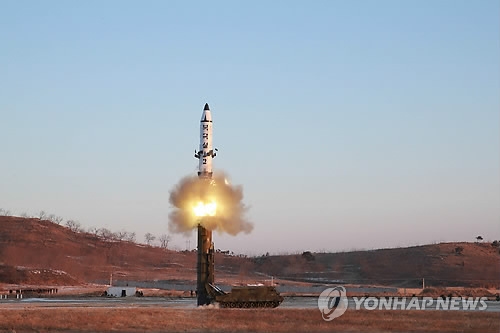 South Korea's unification ministry said that it is too early to judge the reason why North Korea remains mum about the missile launch.

"As authorities are analyzing details about the missile, we will be able to gauge North Korea's intent (not to report the missile launch) after results of the analysis come out," said a ministry official.

Kim Dong-yub, a professor at the Institute for Far Eastern Studies in Kyungnam University, raised doubts over North Korea's firing of a type of KN-15 ballistic missile.

"In February, the North fired the Pukguksong-2 on a mobile launcher from an inland place," he said. "I don't understand (the view) that North Korea launched such a missile near on the coast like a trial flight-test."
lcd@yna.co.kr
sooyeon@yna.co.kr
(END)