TOKYO/WASHINGTON, April 6 (Yonhap) -- U.S. President Donald Trump has empathized that all options are on the table in dealing with North Korea and its repeated provocations amid concerns that Pyongyang may push to carry out an additional nuclear test, news reports said Thursday.

The remarks came in a telephone conversation earlier in the day with Japanese Prime Minister Shinzo Abe, according to the reports which quoted Abe from a nationally televised press conference. 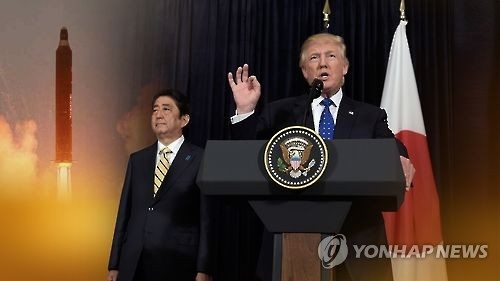 The North fired a ballistic missile from its eastern port of Sinpo into the East Sea on Wednesday. Experts see it as an attempt to set the tone for the upcoming summit between Trump and his Chinese counterpart Xi Jinping later this week.

Trump's tough talk appears in line with what Secretary of State Rex Tillerson said during his recent trip to Seoul that all options, including military action, remain on the table in addressing the North's nuclear issue.

In their telephone talks that lasted around 35 minutes, Trump and Abe also agreed that Pyongyang's latest ballistic missile test is a dangerous provocation and a grave threat, adding that they will intensify cooperation with the international community against the North, according to the reports.

"The president emphasized that the United States stands with its allies Japan and South Korea in the face of the serious threat that North Korea continues to pose," the White House said in a readout. "The president also made clear that the United States will continue to strengthen its ability to deter and defend itself and its allies with the full range of its military capabilities."

The readout made no mention of Trump's reported remark that all options are on the table.

Anxiety remains high that North might be seeking to carry out additional nuclear or long-range ballistic missile tests in time for the Trump-Xi meetings scheduled for Thursday and Friday in the U.S. leader's Mar-a-Lago resort in Florida. Observers say that the latest missile launch might be a prelude to a major provocation down the road.
(END)

(LEAD) Trump says all options on table in dealing with N. Korea

(LEAD) Trump says all options on table in dealing with N. Korea