Kim Hong-kyun, special representative for Korean Peninsula peace and security affairs at the South Korean foreign ministry, talked to his U.S. and Japanese counterparts -- Joseph Yun and Kenji Kanasugi -- in separate telephone calls, according to the ministry. 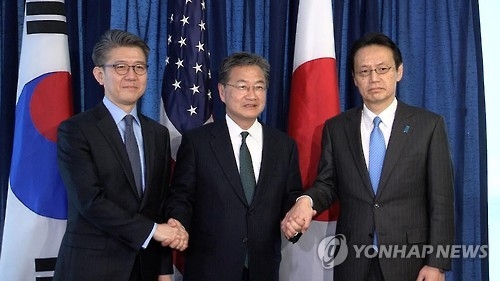 The talks came a day after the North fired a ballistic missile from its eastern port of Sinpo into the East Sea. Experts see it as an attempt to set the tone for the summit between U.S. President Trump and his Chinese counterpart Xi Jinping later this week.

"The nuclear envoys of South Korea, the U.S. and Japan strongly condemned the North's latest ballistic missile provocation," the ministry said in a text message sent to reporters.

"They also agreed to closely cooperate in drawing up countermeasures including actions of their own and those through the U.N. Security Council, while making thorough preparations against the North's additional provocations," it added.

Tensions ran high amid speculation that the North may carry out a major provocation including an additional nuclear test in time for the Trump-Xi meetings scheduled for Thursday and Friday at the U.S. leader's Mar-a-Lago resort in Florida.

Some experts worry that the latest missile launch is a prelude to a major provocation down the road. The North conducted two nuclear tests last year alone.

In their first summit talks, the leaders of the world's two most powerful countries are said to discuss the North's nuclear and missile issue as one of key agenda items.