Hyundai and Kia, which together form the world's fifth-biggest carmaker by sales, have diversified their product lineups by adding fewer greenhouse gas emitting models mainly to compete with their Japanese rivals in major markets.

In 2009, Hyundai and Kia launched the hybrid versions based on the Avante liquefied petroleum injection (LPi) and Forte LPi compact, respectively, making their forays into the market.

In 2011, Hyundai added the hybrid model of the Sonata and Kia the K5 midsize sedan hybrid to their lineups.

More recently, Hyundai introduced the Ioniq hybrid car and the Grandeur Hybrid, with Kia coming up with the Niro hybrid vehicle. 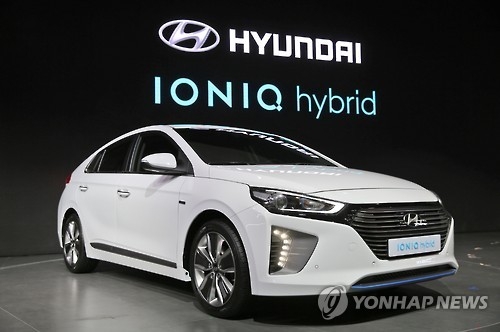 On top of the hybrid vehicles, the country's two leading carmakers also looked to pure-electric vehicles to secure a share in the rapidly changing automobile markets.

All-electric versions based on Hyundai's Ioniq, and Kia's Soul boxcar and Ray minicar are available in the domestic markets.

Hyundai took a step further in 2013 by launching a hydrogen-powered fuel cell model based on the Tucson SUV for the first time in the world. But its sales remain weak due to the high price and lack of hydrogen charging infrastructure.

In Hyundai's latest move to continue its hybrid initiative, the carmaker launched the Grandeur Hybrid last month, with an aim to sell more than 10,000 units in the domestic market annually.