SEOUL, April 6 (Yonhap) -- South Korea and the U.S. will perform a set of massive joint artillery drills here this month to hone their combined capability to retaliate against provocations by North Korea, the defense ministry said Thursday.

The Integrated Firepower Exercise 2017 is tentatively scheduled to take place at an Army training field in Pocheon, just south of the inter-Korean border, on April 13, 21 and 26, the Ministry of National Defense said. The schedules are subject to change upon climate conditions.

The upcoming event marks the ninth round of the joint firepower exercise which was first introduced in 1977. 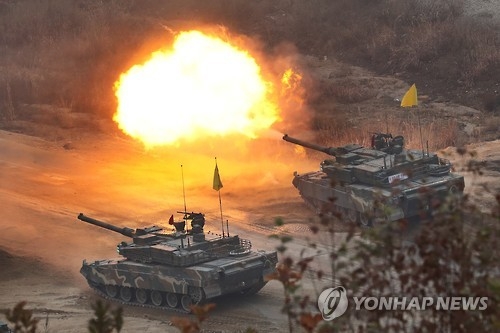 During the drills to be open to the public, the South Korean and U.S. militaries will showcase their up-to-date firepower assets and carry out live-fire shootings, according to the ministry.

Some 2,000 forces from 48 South Korean and American military units will join the exercises in which a host of armored vehicles, combat helicopters and multiple-launch rocket systems from both sides will be deployed.

About 2,000 people, including foreign emissaries in South Korea, local residents and politicians, will be invited to watch the war game in person.

The upcoming joint firepower exercise, to be held alongside the on-going Foal Eagle exercise between the allies, will be an opportunity to show off the combined ability to perform a joint operation as well as the South Korean military's up-to-date military capabilities, the ministry said.