Chung, who was a FIFA vice president from 1994 to 2011, said even though FIFA is working to reform under new leadership, Blatter's people are still on its Ethics Committee and Appeal Committee. Blatter, who stepped down as FIFA president in 2015, has been banned from the sport for six years on a string of corruption scandals and is considered a nemesis of Chung.

"When one looks at the key members of the Ethics Committee and the Appeal Committee who were put there by Blatter, I realize that this is not the end of FIFA's reform but only the beginning," Chung said at a press conference in Seoul. "I will seek all means possible to fight this, including an appeal to the (Court of Arbitration for Sport)." 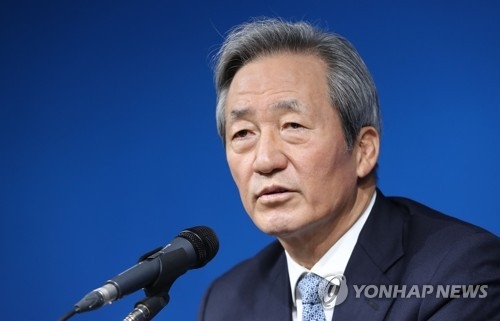 In 2015, Chung was found guilty of infringing on FIFA's code of conduct during South Korea's bidding process for the 2022 World Cup, which was eventually awarded to Qatar in 2010. He first received a six-year ban by the Ethics Committee, but the Appeal Committee later reduced the punishment to five years and also cut the fine imposed on Chung from 100,000 Swiss francs (US$99,600) to 50,000.

Chung, however, was still fed up with the ruling and decided to take his case to the CAS, the world's top sports tribunal. The 65-year-old South Korean said he will file his appeal to the CAS next week.

The former Korea Football Association chief claimed that because the two FIFA committees deliberately sent their documents late, it took him a long time to present his case to the arbiter of sports-related disputes.

"Because the Ethics Committee had previously taken six months to send its reasoned decision, I can finally prepare to file an appeal to CAS, some 18 months after the original ban was imposed," he said. "This is akin to a court carrying out the execution of the defendant, then sending out the ruling 18 months later. This is malicious behavior."

Chung, who previously sought the FIFA presidency, emphasized that fighting against FIFA's ban and Blatter's side is not about restoring his personal honor but helping FIFA carry out "meaningful" reform and gaining the trust of football fans.

"My goal is not to take high-ranking positions in FIFA again," he said. "Who is going to do this kind of work besides me? I think this is my given duty."

Chung also asked FIFA President Gianni Infantino, who took over the office in February 2016, to take an interest in his case.

"I really expect that Infantino will change lots of things for FIFA, but Blatter's people are still on the Ethics Committee and Appeal Committee," he said. "It's going to take some time, but I will do everything in my power to make FIFA clean."

Chung Mong-joon vows to wipe out Blatter's people at FIFA

Chung Mong-joon vows to wipe out Blatter's people at FIFA