SEOUL, April 6 (Yonhap) -- South Korea and Sudan have agreed to step up their economic cooperation as the recent lifting of U.S. sanctions opened up business opportunities in the African country, the foreign ministry said Thursday.

South Korea's Deputy Foreign Minister for Economic Affairs Lee Tae-ho made the agreement with Kamal Eldeen, Sudan's state minister of foreign affairs, during Lee's visit on Tuesday and Wednesday to mark the 40th anniversary of diplomatic relations, the Ministry of Foreign Affairs said.

Washington tentatively lifted its 20-year-old sanctions on Sudan in mid-January on its progress in peace and humanitarian issues. The decision is subject to a six-month review.

"Lee's latest visit to Sudan, which marks the 40th anniversary of their diplomatic relations, has been an opportunity to deepen and expand South Korea's cooperation with Sudan, one of the biggest markets in the African region below the Sahara Desert, ahead of the final removal of U.S. sanctions on Sudan in July," the ministry noted.

The officials expressed hopes to expand economic and trade partnership on the occasion of the easing of U.S. sanctions. The Sudanese minister called for closer cooperation especially in infrastructure, the ministry said.

During the meeting, the Sudanese minister affirmed his country no longer has any kinds of military collaboration with North Korea and vowed its support for international efforts to solve the security issues involving North Korea, the ministry noted.

Sudan earlier announced that it has completely severed its military ties with North Korea, during Sudanese Foreign Minister Ibrahim Ghandour's visit to Seoul in November. Since then, Sudan has condemned the communist country's nuclear and missile development.

Lee requested Sudan's support for South Korean companies' entry into the market and approval of bilateral pacts that will enable Korea to boost trade and investment with Sudan. 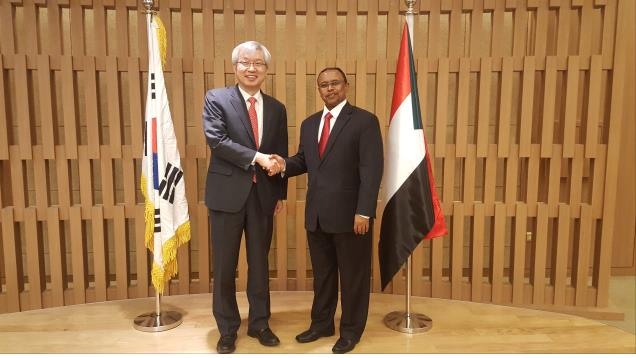