MOKPO, South Korea, April 6 (Yonhap) -- The government is considering searching for the missing passengers of the Sewol ferry before it is moved to a dry dock on land, an official said Thursday.

Salvage operators have been trying to move the 6,800-ton Sewol ferry onto land at the port of Mokpo, some 410 kilometers southwest of Seoul, from a semisubmersible transport ship. Originally the government wanted to launch a search for the missing victims whose remains may still be inside the wreck after it was transported to land.

But the operation has run into an obstacle as the ferry is estimated to weigh around 14,592 tons at present due to water and mud that has entered the hull.

"We are well aware of the hopes of the bereaved families of the missing victims. We are considering starting the search before landing the ship," said Lee Cheol-jo, the head of the operation team.

Meanwhile, 20 animal bone fragments and some 100 items including a passport, bags and other personal belongings have been discovered on the deck of the semisubmersible ship carrying the Sewol. 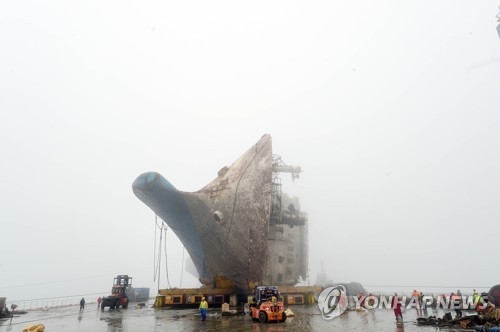