SEOUL, April 6 (Yonhap) -- The Koreas will go head-to-head in a crucial qualifying match for the top Asian women's football competition this week as they meet for the first time north of the border.

South Korea and North Korea will face each other on Friday at the Asian Football Confederation (AFC) Women's Asian Cup Group B qualifying tournament, which also features India, Uzbekistan and Hong Kong. All Group B matches are played at Kim Il-sung Stadium in Pyongyang.

This is the first time the two Koreas have squared off in a competitive football match in the North's capital for either the men's or women's team. Including a friendly, South Korea last played in Pyongyang in 1990 when the men's national team suffered a 2-1 loss there.

Aside from political matters and rivalry, the upcoming football match is considered a must-win duel for both sides on their way to clinch a spot at the Asian Cup. 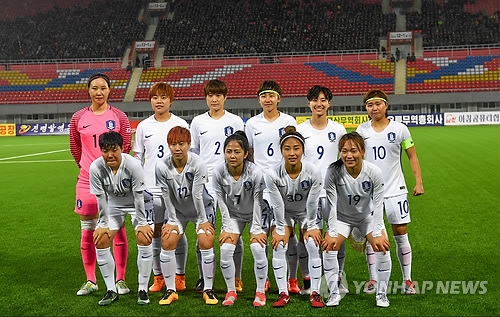 Only the top finisher in the group is allowed to join the 2018 Women's Asian Cup in Jordan. The eight-team Asian Cup also doubles as the qualifying tournament for the 2019 FIFA Women's World Cup in France, meaning any team except the winner is automatically out for the women's showpiece event as well.

Both sides had a good start to their qualifying campaign. South Korea on Wednesday demolished India 10-0, while North Korea routed India 8-0 on Monday and beat Hong Kong 5-0 two days later.

Since neither the South nor the North are likely to lose to low-ranked competitors in the group, the winner of the all-Korea showdown is expected to grab the ticket to Jordan. North Korea are ranked No. 10 in the latest FIFA rankings, followed by South Korea (No. 17), Uzbekistan (No. 42), India (No. 56) and Hong Kong (No. 65).

History shows North Korea are the favorites. The three-time Asian Cup winners have dominated South Korea so far with 14 wins, one loss and two draws. The only South Korean victory came in 2005.

South Korea, led by head coach Yoon Duk-yeo, will at least try to collect a draw, if not going for a victory. If the all-Korea contest ends up in a stalemate, Yoon's side will try to outscore the North Koreans in remaining matches to get an edge in goal difference, the first tiebreaker when two teams are tied on points.

The Taeguk Ladies warmed up their firepower against India as seven players put their names on the score sheet. Forward Lee Geum-min showed her scoring instinct with a hat trick, while Ji So-yun also grabbed a brace against India. Ji, who plays with the English club Chelsea Ladies FC, is also the country's all-time scoring leader with 43 goals in 92 matches. 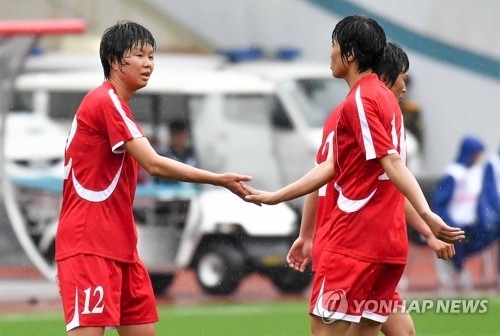 Eight North Koreans have produced 13 goals in their last two matches and four of them each bagged two goals. But North Korean captain Ho Un-byol, who was tabbed a dangerous player by South Korean boss Yoon, has been silent in the qualifying round. Ho has previously knocked out South Korea at the 2013 East Asian Cup and the 2014 Asian Games with her strikes.

The South Korean players have to be aware of the North Korea's young players who won the FIFA U-20 Women's World Cup championship last year. North Korean coach Kim Kwang-min previously said these young players are great helpers for the senior side, though they may lack some experience.

South Korea also have to deal with the pressure of playing in front of the North Korean crowd at Kim Il-sung Stadium. The facility, named after North Korea's founder and first leader, can accommodate some 50,000 fans.

"There are things that we may be behind North Korea in football, but we are now prepared," Yoon said on Wednesday. "I think it's about time for us to beat North Korea with a good performance."