SEOUL, April 6 (Yonhap) -- The chief executive of the Industrial Bank of Korea (IBK) on Thursday expressed doubts over the growth potential of Internet-only banks here, although he was "scared" over the initial consumer response to South Korea's first Internet bank.

Kim Do-jin, CEO of IBK, said Internet-only banks will have no choice but to see their costs rise if a growing number of customers are unable to repay their debt.

If so, Kim said, Internet-only banks will lose their advantage of saving costs because they must hire more staff to deal with a rise in delinquency rates.

"In Internet-only banks, there also would be customers who fall behind in their loan payments," Kim told reporters. "So, I wonder how Internet-banks will take shape a year later." 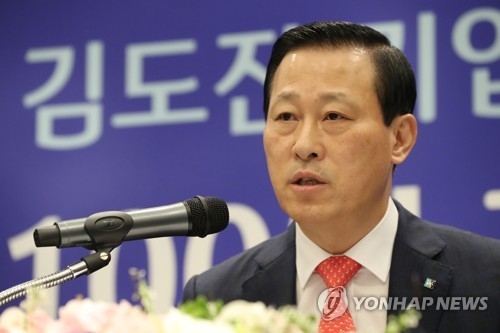 Another Internet bank, Kakao Bank, which won final approval this week, is expected to begin operations within the first-half of this year.

Kim said the pool of customer base for Internet-only banks may be "limited," saying the banks would target people with mid-level creditworthiness.

Citing Japan's Jibun Bank Corp., Kim said the customer base of the Japanese online lender is between 2 million and 3 million people, compared to Japan's population of 120 million.

Kim joined IBK in 1985. He has served as chief of the bank's management strategy group since 2014 after holding several key posts.
(END)