SEOUL, April 6 (Yonhap) -- Baseball has the most loyal fanbase among the four professional sports in South Korea, according to a report released by a local sports organization on Thursday.

The Korea Professional Sports Association (KPSA) said that baseball fans in South Korea on average have supported their respective pro clubs for an average 7.9 years, the longest among fans in all pro sports such as football, basketball and volleyball. The data were based on a survey on 20,621 people between September and November last year.

When asked about the reason supporting their respective clubs, 25.6 percent of the respondents answered that they wanted to root for the team that represents the area they currently live in, while 20.6 percent said they chose to cheer for the team with their favorite player or coach. Only 17.7 percent said they support because the club is from their hometown.

The KPSA report said football has the biggest male fanbase with 70.8 percent, followed by men's basketball at 62.7 percent and baseball at 57.1 percent.

Volleyball was the only pro sport in South Korea that had more female fans. The demographics showed 54.4 percent of its fanbase are women. 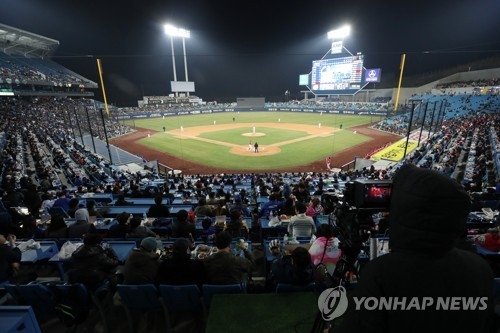 Baseball has most loyal fanbase in S. Korea: report

Baseball has most loyal fanbase in S. Korea: report