IBK CEO Kim Do-jin said acquiring a local bank in Indonesia by next year is an important move to expand into the world's fourth most populous country as the Indonesian authorities do not allow foreign banks to open local branches. Currently, IBK runs a representative office in Indonesia's capital city of Jakarta.

"We will carefully pursue a merger and acquisition deal by taking into account the synergy it can bring to IBK," Kim said in a news conference at the headquarters of the Korea Federation of Banks in central Seoul. 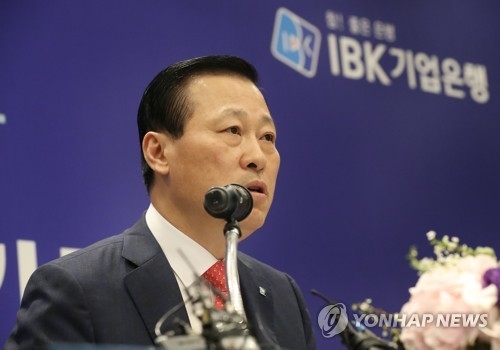 He said IBK has selected its legal and accounting partners in Indonesia for an M&A with an Indonesian bank, which he said could be concluded in 2018.

Still, he declined to give any further details.

The planned M&A is meant to meet the financial needs of South Korean companies doing business in Indonesia, which is home to more than 1,000 South Korean firms, he pointed out.

The lender, which specializes in supporting small and medium-sized enterprises, is also seeking to make inroads into Vietnam and Cambodia to capitalize on the growth potential in emerging markets to boost its overseas earnings amid record-low rates and a fierce competition at home.

South Korea's key rate stands at an all-time low of 1.25 percent and commercial banks have stepped up their efforts in recent years to secure new growth drivers in emerging markets away from the nearly saturated South Korean market.

"To establish an Asian financial belt is a must to boost the ratio of our overseas earnings to 20 percent," Kim said.