BANGKOK, April 6 (Yonhap) -- Chulalongkorn University, Thailand's oldest and one of its most respected higher education institutes, will open a Korean language major for undergraduate students next year, the Korea Education Institution said Thursday.

The university revealed a plan to set up the major on Wednesday when it held a Korea festival as part of events celebrating the centennial of the school.

Timed with the launch of the Korean language major, the university has developed its own textbook to learn the language, the Bangkok-based institution said. The textbook, tailored for Thai learners studying Korean, is set to be officially published next year.

With the rising popularity of the language, a Thai education authority has decided to adopt it as an official subject for college exams starting in 2018, prompting many Thai schools to include the Korean language in their curriculums. 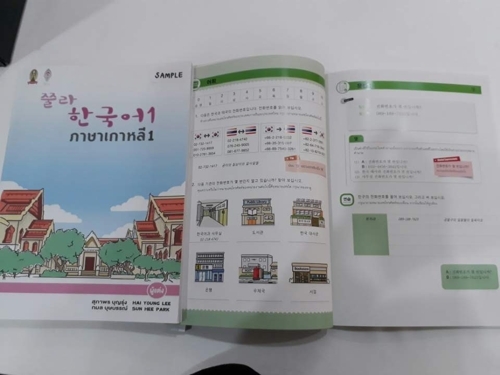 Triam Udom Suksa, a prestigious junior high school in Bangkok, has launched a Korean language class of 35 students with a competition rate for student screening rising to 10 to one.

Yoon So-young, chief of the Korea Education Institution, said 25 Thai schools have begun to offer the Korean language for the first time this year, raising the number of schools offering the language nationwide to 107.

"With the launch of the Korean language major at Chulalongkorn, Thailand's top university, the number of high schools adopting the language will increase down the road," Yoon added.