SEOUL, April 6 (Yonhap) -- Former United Nations Secretary-General Ban Ki-moon met with the country's top diplomat on Thursday, a homecoming which comes shortly ahead of him moving to the U.S.

Ban held a meeting with Foreign Minister Yun Byung-se at the Ministry of Foreign Affairs in central Seoul, his first return to the ministry where he served as the top diplomat from January 2004 to December 2006, since he took the helm of the U.N. in 2007.

The visit came shortly before Ban is set to leave for the U.S. where he will lecture as a visiting professor at Harvard University.

His visit was warmly accepted by junior diplomats who came out to greet and shake hands with him. 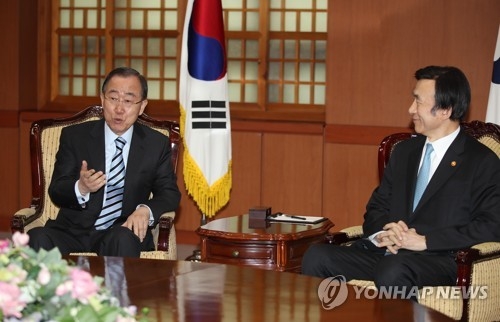