The tournament, doubling as a test event for the 2018 PyeongChang Winter Olympics, also features the Netherlands (No. 19), Britain (No. 21) Slovenia (No. 24) and Australia (No. 28). The top nation after round-robin play will be promoted to Division I Group B next year, while the last-place nation will be relegated to Division II Group B in 2018. 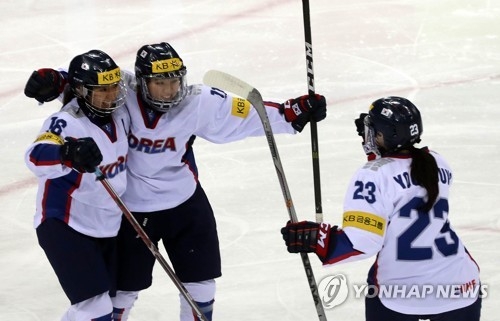 With Thursday's victory, South Korea remained atop the standings with four wins. The Netherlands also has four wins but trails South Korea in goal difference. They will clash Saturday with the championship at stake.

It was the first women's hockey game between the Koreas on the divided peninsula, held against a backdrop of rising tensions here in light of North Korea's provocations and threat of an imminent nuclear test.

Adding to the palpable sense of occasion was the presence of Rene Fasel, head of the IIHF, and Lee Hee-beom, the chief organizer of the 2018 PyeongChang Winter Games, who joined the captains at center ice for the ceremonial puck drop.

The hockey game also fell on the eve of a women's football showdown between the Koreas in Pyongyang. North Korea will host South Korea in a qualifying match for the Asian Football Confederation (AFC) Women's Asian Cup Friday at Kim Il-sung Stadium.

It remains to be seen if these games on both sides of the border could help ease strained inter-Korean relations. Seoul has said the games are merely part of sports exchanges and no other form of meaningful dialogue is possible given current tensions.

On the ice, South Korea was in control for the majority of the match, despite standing just three spots above North Korea in the world rankings at No. 23.

North Korea established a strong defensive stance in the neutral zone early on, hoping to keep the South Korean offense -- coming off an 8-1 win over Australia Wednesday -- in check. 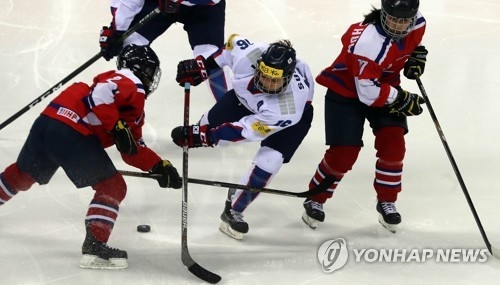 Yet it didn't take long for South Korea to solve the defense with speed, deft puck handling and crisp passing. The host went on to score two power-play goals in the opening period.

Defenseman Park Ye-eun opened the scoring at 8:13 with a wrist shot through a screen from the top of the right face-off circle.

About three minutes later on the team's second power-play chance, forward Jo Su-sie redirected a wrister by Park to put South Korea up 2-0.

South Korea was sloppy on its own end to start the second period, allowing North Korea to put some pressure on goalie Han Do-hee. A series of turnovers in the defensive zone forced Han to make some tough saves to keep North Korea off the board.

South Korea finally gave itself some breathing room, as Lee Eun-ji poked home a loose puck after a goalmouth scramble at 17:57 in the second.

North Korea pushed South Korea around in the third period, trying desperately to foil the home team's shutout bid, but ran out of time to suffer its third loss in four games here. 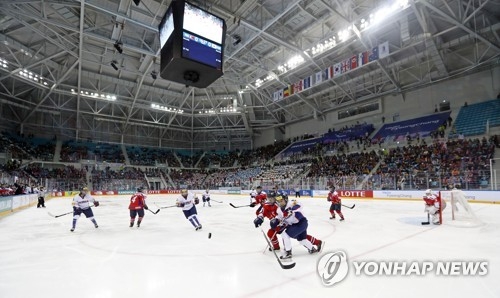 The brand new arena drew 5,800 supporters for both sides, by far the largest crowd so far at the tournament. South Korea had its share of local fans, and North Korea has been getting loud support all week from a South Korean civic group, whose members have formed a cheering squad of some 300 and have attended every North Korean game.

For Thursday, more than 500 showed up in the North Korean section with thundersticks, all dressed in white sweatshirts bearing the Korea Unification Flag -- the peninsula colored in blue. 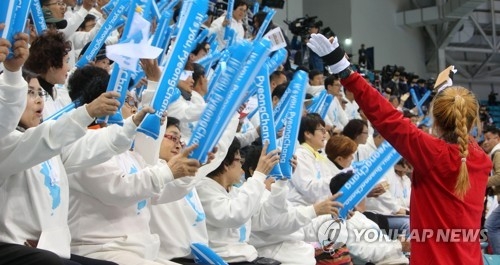