GANGNEUNG, South Korea, April 7 (Yonhap) -- After South Korea was done beating North Korea in a 3-0 victory at the women's hockey world championships here Thursday, players from the two teams gathered around for souvenir photos ,a gesture of goodwill marking a U.N. international day celebrating the power of sport in promoting peace.

This was the first women's hockey game between the Koreas on the divided peninsula. In men's hockey, a South Korean team of college and semi-pro players and the North Korean national team played exhibition games on March 3 and 4 in 2006.

The two remain technically at war because the 1950-53 Korean War ended in a truce, not a peace treaty.

South Korea has now won four straight games, taking a step closer to the championship and a promotion to Division I Group B in 2018. North Korea has now lost three of its four games so far in the six-nation competition, which wraps up Saturday. The worst team here will be relegated to Division II Group B next year.

The Netherlands, Slovenia, Australia and Britain are also playing here, but casual observers wouldn't have known that, given the hype surrounding the all-Korea showdown.

The North Korean team crossed the border at a time of mounting tensions on the peninsula. North Korea fired a ballistic missile into the East Sea Wednesday, and the threat of an imminent nuclear test has further strained inter-Korean relations.

After 60 minutes of battle in as tough and physical a sport as there is, the players mingled with each other on the ice. And if the athletes were affected or distracted by friction between their countries, they weren't showing it on the ice post-game -- though some North Korean players shed tears of disappointment. It was South Korea's second straight win over the North after four losses in a row.

Incidentally, Thursday was the U.N. International Day of Sport for Development and Peace, which recognizes the positive influence that sport can have in promoting peace and erasing cultural barriers. 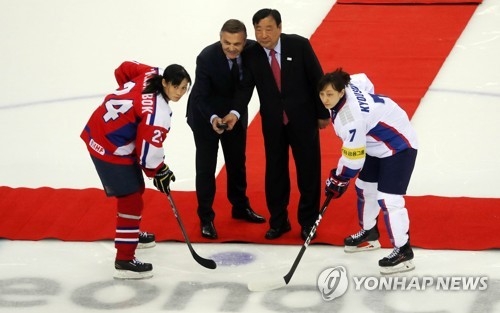 And the players on the ice here were pretty good representatives for those ideals.

After each game here, the tournament organizers have been naming best players for both the winning and the losing teams. On Thursday, Chung Mong-won, president of the Korea Ice Hockey Association in the South, presented the award to North Korean forward Jin Ok. Then Mun Yong-song, general manager of the North Korean team, did the same to the South Korean winner, Lee Eun-ji.

The teams also enjoyed raucous support of 5,800 fans at the brand new arena.

The North Koreans have had some 300 members of a South Korean civic group root for them all week. They've been showing up in sweatshirts bearing the Korea Unification Flag, an image of the peninsula colored in blue, and chanting messages like "We Are One!" and "Go Korea!" They also chanted the names of every North Korean player at the start of the game. 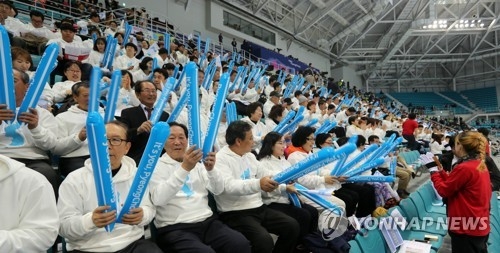 Afterward, as has been their custom all week, North Korean players declined to speak to the media. Only Han Ho-chol, listed as a North Korean team manager and its de facto spokesman, said, "Thank you," when asked about the support his team received Thursday.

For all the hoopla surrounding the game, South Korean players said they tried to treat this game just like any other match. But they also enjoyed the "interesting" experience of taking group pictures after such a competitive game.

"At last year's world championships, we didn't really talk to each other," said South Korean defenseman Park Ye-eun, who scored the team's first goal. The South had won 4-1 a year ago.

"I think the North Korean players were a bit friendlier this time," she said. "And I think it was really cool to take the pictures afterward. The players were all mixed in, and I think this was a significant occasion."

It remains to be seen if these games on both sides of the border could help ease strained inter-Korean relations. The South Korean government has tried to downplay the significance of the occasions, saying the reciprocal visits are merely sports exchanges and any other form of meaningful dialogue isn't possible given inter-Korean tensions. 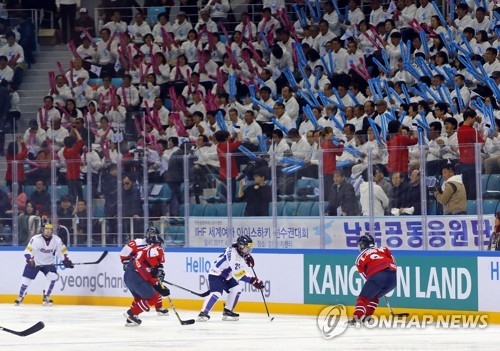