GANGNEUNG, South Korea, April 7 (Yonhap) -- The buildup was intense and pressure-packed, and the hype surrounding the game boiled over.

"I definitely feel relieved it's over with," Murray said after her team's 3-0 win at the International Ice Hockey Federation (IIHF) Women's World Championship Division II Group A at Gangneung Hockey Centre in Gangneung, Gangwon Province.

"Everyone was putting so much stress on this game and I think they built it up a little bit too much," the coach added. "I think our girls definitely felt the pressure. We didn't play our best today, but (I'm) definitely relieved now that it's over because we can go back to playing hockey." 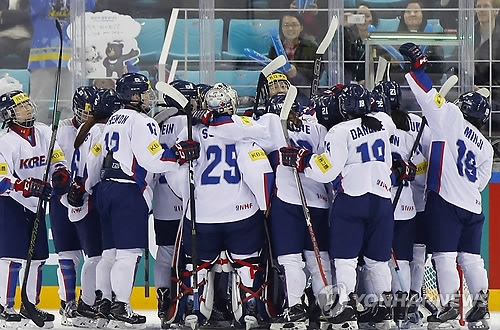 The game took place against a backdrop of lingering tensions on the divided Korean Peninsula. Just a day before the game, North Korea fired a ballistic missile into the East Sea, not all that far from this seaside city, 230 kilometers east of Seoul. The North Korean team made the trip amid expectations that the hockey game could help ease strained inter-Korean relations.

But Murray said she tried to remind her players that this would be just another game.

"We didn't stress the importance of it being 'North Korea vs. South Korea,'" she added. "We used the same game plan that we used against Britain (on Monday) when we had success. We didn't play the South Korea vs. North Korea dynamic."

South Korea has now won four straight games and is tied in first place with the Netherlands. The top nation at this tournament will be promoted to Division I Group B next year, and these two countries will square off Saturday with the title at stake.

"Our ultimate goal is to win the world championship. This was a stepping stone in the process," Murray said of Thursday's win. "For the last game, both teams are really skilled. It's going to come down to who has energy and who doesn't."

S. Korea hockey coach 'relieved' to be done with N. Korea at worlds

S. Korea hockey coach 'relieved' to be done with N. Korea at worlds