GANGNEUNG, South Korea, April 7 (Yonhap) -- South Korean shut out North Korea 3-0 in their much-anticipated women's hockey game on Thursday, but it was what took place afterward that the victorious players found even more interesting and, at least for some of them, "cool."

South Korea controlled the pace of the most hyped-up game at the International Ice Hockey Federation (IIHF) Women's World Championship Division II Group A at Gangneung Hockey Centre in Gangneung, Gangwon Province. It was played amid tensions on the divided peninsula, with North Korea having fired a ballistic missile into the East Sea just a day before the game. The threat of an imminent nuclear test has further strained inter-Korean ties.

While it remains to be seen whether this game alone could actually help ease tensions, South Korean athletes at least had a day to remember.

The game fell on the U.N. International Day of Sport for Development and Peace, which recognizes the positive influence that sport can have in promoting peace and erasing cultural barriers. And to commemorate the occasion, players for both teams gathered at center ice after the game for a group photo.

The cause might have been noble, but it was still somewhat awkward to see the players mingle with each other, especially with some North Korean players in tears after the loss. 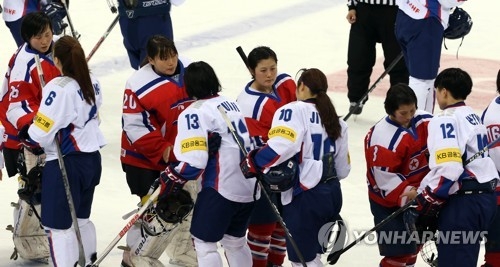 South Korean forward Park Jong-ah said she couldn't quite get close to her opponents because they seemed too upset.

"I wanted to put my arm around their shoulders, but I just couldn't do that," she said. "I'll try to do that the next time we meet."

Park Ye-eun, who scored South Korea's first goal, said the North Koreans were "a bit friendlier" off the ice compared to their last meeting at the 2016 world championships.

"And I think it was really cool to take the pictures afterward," she said. "The players were all mixed in, and I think this was a significant occasion."

"I tried to talk to anyone I could. It was really cool," she said. "I tried to just say, 'Good game.' I didn't know how much English they would understand. I tried to keep it really simple."

Unlike most of her teammates, Brandt, who got her South Korean passport last year, faced North Korea for the first time here.

"Before the game, I didn't really know what to expect," she said. "I tried to ask some of my teammates their feelings about the game. They just said they were treating this game like any other game."

South Korea had lost its first four meetings against North Korea, but the tables have now been turned, with the South having won the past two. Captain Lee Kyou-sun, who has witnessed some lean years, said she feels South Korea clearly has the upper hand.

"In the past, we were busy just playing defense against them," Lee said. "But now, I think we're definitely a superior team. And we're getting better and better."

The North Korean players declined to speak to the media. 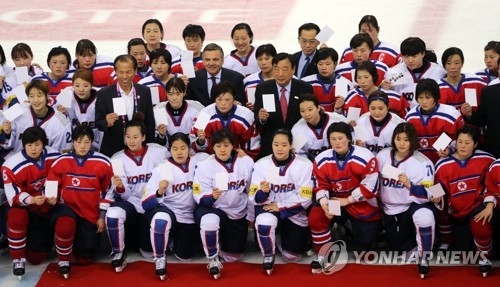