WASHINGTON, April 6 (Yonhap) -- U.S. President Donald Trump greeted Chinese President Xi Jinping on Thursday, kicking off a series of crucial first meetings where he plans to focus on reducing the trade deficit with the world's No. 2 economy and getting Beijing to exercise genuine pressure on North Korea.

Trump and the first lady Melania Trump welcomed Xi and Chinese first lady Peng Liyuan as they arrived at Trump's Mar-a-Lago resort in Florida in a black limousine around 5:10 p.m. A military guard lined the drive on the way in, according to White House pool reports.

TV footage showed Trump, dressed in a dark suit with a red tie, shaking hands with Xi and saying to him, "Thank you very much." Trump is scheduled to host state dinner for Xi. Formal summit talks are scheduled for Friday. 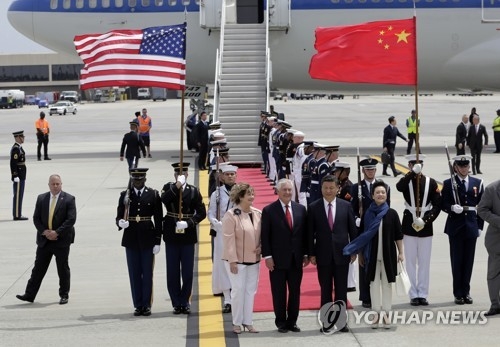