SEOUL, April 7 (Yonhap) -- Samsung Electronics Co. started preorders for the Galaxy S8 on Friday, with the tech giant seeking to have the new flagship break the previous sales record set by the short-lived Galaxy Note 7.

While the 5.8-inch Galaxy S8 comes with a price tag of 935,000 won (US$826), the device can be purchased as low as 631,400 won considering discounts provided by mobile carriers. Similar benefits will also be applied on its larger brother, the 6.2-inch Galaxy S8 Plus.

The discounts provided by South Korea's three mobile carriers are similar to those applied on the Galaxy S7 and slightly higher than that of the LG G6 smartphone, which was launched earlier.

Samsung will provide a Bluetooth speaker worth 99,000 won to those purchasing the Galaxy S8 through preorders.

Buyers of the premium edition of the Galaxy S8 Plus that comes with a 6GB RAM and internal data storage capacity of 128GB can also choose to receive the DeX instead, which allows users to connect smartphones to a desktop monitor and keyboard.

Industry watchers are keenly following preorder numbers of the Galaxy S8 and the Galaxy S8 Plus to see if it beats the popularity of the Note 7 phablet released last year. The Note 7's preorders hit 400,000 units.

The new smartphones feature high resolution displays that bend on both sides and innovative technologies, such as iris and face recognition scanners, and a smart voice assistance program named Bixby.

While the official sales of the Galaxy S8 kick off on April 21, Samsung plans to allow those who purchased the devices through preorders to receive them as early as April 18. The preorders will run through April 17. 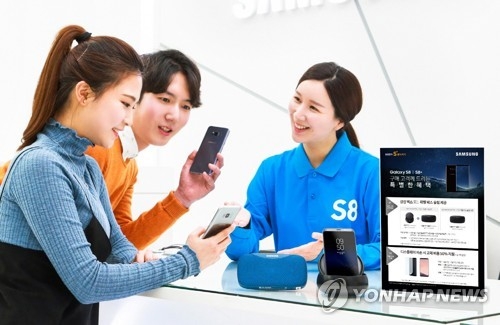