SEOUL, April 7 (Yonhap) -- The chief of South Korea's retail giant Lotte will be grilled by prosecutors Friday as they widen the investigation into local conglomerates in relation to a corruption scandal that removed former President Park Geun-hye from office.

Shin Dong-bin is set to appear at the Seoul Central District Prosecutors' Office at around 9:30 a.m. to bear witness to influence-peddling scandal.

Prosecutors are trying to determine if donations Lotte gave to two dubious foundations allegedly controlled by Park's friend Choi Soon-sil were bribes in relation to the company's bid for a duty-free business.

The retail giant was selected by the Korea Customs Service to operate the lucrative shop in Seoul, together with Hyundai and Shinsegae, in December.

Prosecutors here have been expanding their probe into local business groups after indicting Lee Jae-yong, Samsung Group's de facto leader, on charges of giving kickbacks to Choi. Investigators have stressed that giving money to Choi should be seen as bribing the former president, in return for business favors.

Park was named an accomplice in the bribery allegations, as well as in colluding with Choi in forcing dozens of conglomerates to donate 77.4 billion won (US$70 million) to the foundations. Park, Lee and Choi are all in custody, though they are all flatly denying the charges leveled against them.

The Seoul Central District Court is set to begin the trial on Lee's bribery allegations on the same day. 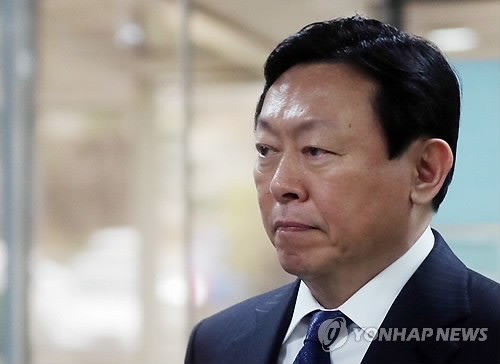 Lotte chairman to be questioned over corruption scandal

Lotte chairman to be questioned over corruption scandal