But none of the four operators submitted a bid for the fashion and accessories zone, apparently citing low efficiency given the high rental costs. They applied for spaces in the beauty product, alcohol and beverages, and cigarettes sections.

Doota Duty Free, a smaller player operated by Doosan Group, said later that it decided not to take part in the bidding, saying that it will focus on its city branch for the time being.

The inability to attract strong bids came as a surprise considering that licensing bids for duty-free stores had always entailed heated battles among rivals to win the best slot.

It is also the first time that Incheon airport had to cope with weak bidding by retailers since it opened in 2001.

Industry watchers viewed it as an indication that the duty-free shops are reluctant to make investment as their businesses are facing big losses from Chinese sales.

"Running the fashion slot at the airport duty-free requires efforts to secure key global brands like Louis Vuitton. But most of all, it's a matter of profitability. No one would want to do business when there's going to be no Chinese passing by," an industry official said, asking not to be identified.

Duty-free operators are taking the brunt of China's retaliation against South Korea for stationing a U.S. anti-missile system, known as the Terminal High Altitude Area Defense (THAAD), on its soil. Beijing has strongly opposed the deployment, saying that it will be a threat to its own defense.

Since early this month, South Korea has seen its inbound travelers from the neighbor plunge by more than 30 percent, following Beijing's ban on selling trips to the country. Chinese airlines have also curtailed their flights to Korea.

Market analysts earlier forecast at least a 20 percent on-year drop in their revenues for many retailers, should the number of inbound Chinese tourists fall by 30 percent.

"It's evident that duty-free operators will be hit hard by the decrease in Chinese tourists, as Chinese demand has been the main driver of their sales," said Ham Seung-hee, an analyst at Mirae Asset Daewoo Co.

According to market data, Chinese sales accounted for around 70-80 percent of the local duty-free stores' annual revenue last year. 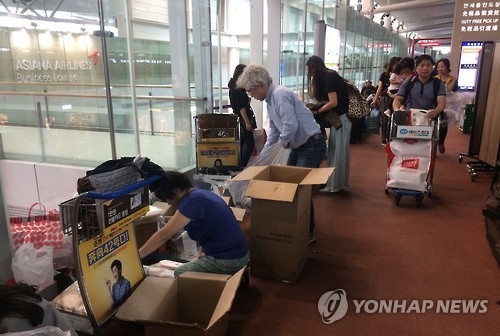