According to the state-run Korea Tourism Organization (KTO), the number of Chinese visitors arriving here on incentive tours with their companies came to some 10,000 in the first three months of the year, down 65 percent from a year earlier.

Earlier, the organization expected foreign visitors on incentive tours to the country to reach over 300,000 this year, but it will be nearly impossible to achieve the goal.

Relations between Seoul and Beijing soured quickly after South Korea announced plans to deploy the U.S. air missile defense system, known as the Terminal High Altitude Area Defense (THAAD), as a way to defend against North Korea's ever developing nuclear and missile technologies.

China has banned special chartered flights to South Korea and tour packages to its neighbor as part of its apparent retaliation against South Korea.

The country has also blocked shipments of various South Korean products, including cosmetics.

Against such a backdrop, the Seoul government has announced plans to develop new tailored tourism programs that will help attract more individuals and small tourist groups from China.

The KTO said an increase in large tourist groups from other Asian countries will also help make up for the loss from China, adding the number of tourists arriving here on incentive tours from Southeast Asian countries is expected to reach 160,000 this year, up 20 percent from about 130,000 in 2016.

In February, a total of 1,154 employees from Millionaire Club Indonesia came here on an incentive tour. And this month, some 3,000 employees of a Taiwanese insurance company are scheduled to visit South Korea. 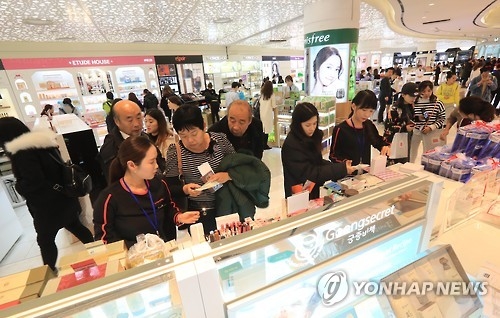