Lee Jae-yong, vice chairman of Samsung Electronics Co., appeared at the Seoul Central District Court in a gray suit, along with four other senior executives from the business group.

He was arrested and indicted in February on charges of giving or promising 43.3 billion won (US$38.3 million) to Park's close friend Choi Soon-sil as kickbacks in return for helping him secure group control through a merger of two key units. Park was named an accomplice in the bribery allegations.

Park is suspected of colluding with her friend to force dozens of local conglomerates, including Samsung, to "donate" a total of 77.4 billion won to the foundations.

"It was an assistance made following the president's request to promote cultural prosperity and sports development, which did not involve getting any favors in return," Lee's legal representative said.

"Business restructuring is one of Samsung's various corporate management activities," the lawyer said. "It was not for transferring power." 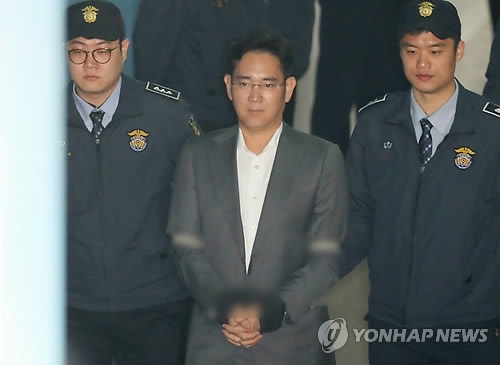