GANGNEUNG, South Korea, April 7 (Yonhap) -- South Korea may have lost all seven games against Japan in women's hockey -- by a whopping margin of 106-1 at that -- but in the minds of Randi Griffin, a naturalized half-Korean forward, those numbers won't mean much at the 2018 PyeongChang Winter Olympics.

South Korea, ranked 23rd in the world and still a fledgling program for the most part, has only earned an automatic Olympic berth as the host. Japan, ranked seventh, played its way into the competition, taking down Germany, France and Australia in the final qualification tournament two months ago.

In the first round at the Olympics, South Korea will also face Sweden and Switzerland, ranked fifth and sixth, respectively. 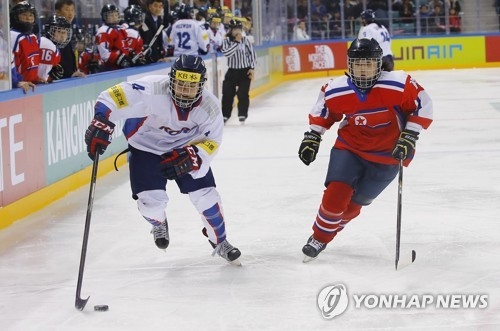 "And probably, the most likely game that we can win is Japan," Griffin added. "I think they're a team that has a really similar style to us. They're small, fast, and they work hard. I think that is going to be a really, really good game."

The closest South Korea has played Japan was the 3-0 loss at the Sapporo Asian Winter Games two months ago. Griffin, born in North Carolina to a Korean mother and an American father, wasn't on that team because of eligibility rules.

But Griffin, a former Harvard forward who has been with the national team since 2015, has grounds for optimism because she has seen how far the team has come and how much further it can go.

South Korea, coached by Canadian Sarah Murray, a former U.S. collegiate star, has won its first four games at the ongoing world championships. And a win over the Netherlands on Saturday will elevate South Korea to Division I Group B next year.

The impressive run comes on the heels of the country's best Asian Winter Games showing ever. Despite losing to Japan and Kazakhstan, South Korea still finished fourth in the six-nation competition. It beat Thailand, China and Hong Kong, after having never won a game at the Asian event before.

Long gone are the days when South Korea routinely lost by double figures and players thought nothing of it.

"I've watched them go from struggling against U.S. high school teams to being at the level of a U.S. college team now and playing really, really good hockey," Griffin said. "I am really proud of the way the team is playing, and the young girls on our team are really stepping up and showing that this team has a really bright future."

Griffin, 28, is part of a more immediate future. A shifty forward who leads the team with 23 shots on goals at the world championships, Griffin is one of a few foreign nationals of Korean descent who have acquired South Korean passports. The group includes two Canadian natives -- Danelle Im and Caroline Park -- and Marissa Brandt, who was born in Korea but was adopted by an American family as an infant. South Korea has recruited them to boost its competitiveness for PyeongChang in the short term and to have these players impart their wisdom learned from North American collegiate hockey to younger teammates for the long term.

These players have given South Korea depth, in particular on offense where it can roll three lines that can score. And the team's once-struggling power plays have improved to the point where South Korea leads the current tournament with eight power-play markers in 23 chances, a success rate of 34.8 percent.

Elsewhere, young South Koreans have been growing by leaps and bounds. Kim Hee-won, still just 15, has emerged as one of the team's best forwards in this tournament, while Eom Su-yeon, who turned 16 two months ago, is a top-four defenseman who quarterbacks a power-play unit.

Given their rapid development, Griffin believes even Sweden and Switzerland won't be invincible, saying, "Honestly, I think we have a shot" against them.

She pointed out that Sweden lost to Germany 3-1 at the world championships in March. In a February training camp before the Asian Winter Games, South Korea battled Germany hard before losing 4-2, the fourth German goal being an empty-netter.

South Korea, of course, remains a work in progress. For one, it needs to find more consistency in the defensive zone and minimize lapses.

Griffin said the team just needs to "keep doing what we've been doing" and get more games under its belt.

"We've got a couple of training camps coming up this year where we're going to go to the U.S. and play some high school teams and Division I college teams," she said. "I think getting opportunities to play against that high level of competition is going to be really important for us."

Griffin said it is important for herself on a personal level to represent the country of her mother's birth in a sport that she calls "my first love." Growing up in the U.S., Griffin said her only exposure to Korean culture came from Koreatown in Chicago, where her grandparents lived. And she craved more. 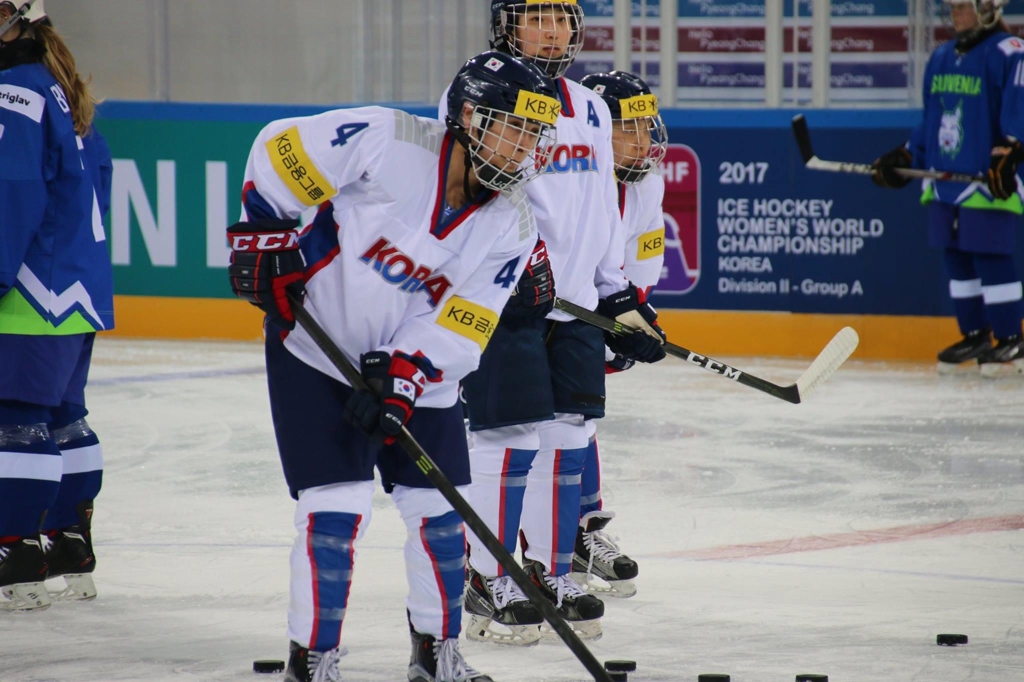 "It really means a lot because I am proud of my heritage," Griffin said of playing for South Korea at an international tournament for the first time. "I grew up eating Korean food and spending a lot of time with my grandmother and grandfather. I always wanted to visit and experience the culture and know what it's like to live here. I think it's a really special opportunity to connect with that side of my heritage."

Though her Korean isn't that great -- "I am working on it," she said -- Griffin has had little trouble connecting with her teammates, some of whom speak English. And the game of hockey itself has also united everyone.

"Hockey really is a bonding for us," she said. "When we're on the ice, connecting with each other and making plays, practicing every day and working hard together, and knowing how much everyone is sacrificing, I think it really brings us together in a special way."

With a degree from Harvard and a doctorate on the horizon, Griffin is probably the last person who should go through the grinds of playing hockey.

But for Griffin, returning to the sport she "absolutely fell in love with" at 10 was a no-brainer.

"Hockey is the greatest game on Earth. And when college ended, it was like breaking up with someone you've been dating for 10 years," she said. "And then it was like, seven years later, they called again and said, 'I want to see you again.' That's kind of what it felt like. And I am like, 'Yeah, of course.'"