South Gyeongsang Province Gov. Hong Joon-pyo of the conservative Liberty Korea Party came in third with 7 percent, followed by Rep. Yoo Seong-min of the splinter Bareun Party with 4 percent and Rep. Sim Sang-jeong of the far-left Justice Party with 3 percent.

The latest survey ranking the candidates for the May 9 presidential election was conducted on 1,005 eligible voters across the country. The margin of error is plus or minus 3.1 percentage points.

Ahn has been quickly rising in various polls since all major parties completed their candidate nomination procedures this week.

The software mogul-turned politician is seen capable of further boosting his electoral chances based on his centrist campaign agenda that appeals to both liberals and conservatives. Moon's election pledges are largely seen drawing a ideological line against the right-wing bloc. 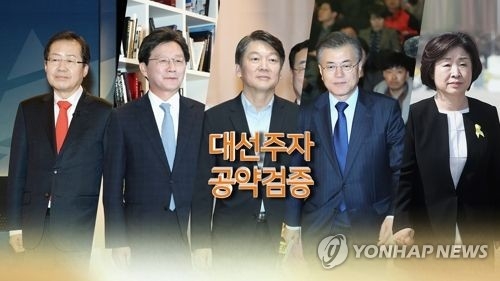