Salvage workers have been trying to move the ill-fated ferry onto land at the port of Mokpo, some 410 kilometers southwest of Seoul, from a semisubmersible transport ship. The ferry was raised from the bottom of the sea last month.

But the land-transfer operation has run into an obstacle as the ferry is estimated to weigh about 16,000 tons due to water and mud that has entered the hull.

A total of 480 module transporters, or platform vehicles with a large array of wheels used to move massive objects, were deployed, but officials decided to deploy 120 more by Saturday morning, according to the Ministry of Oceans and Fisheries. 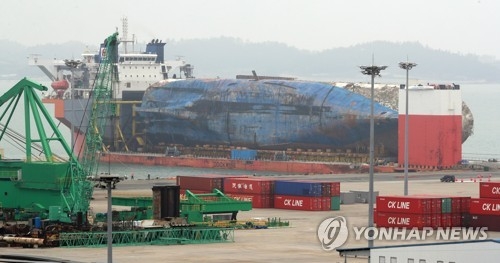