SEOUL, April 7 (Yonhap) -- The liberal Democratic Party will form an in-house panel to look into the allegations of irregularities during its splinter People's Party's recent presidential primaries, its chief said Friday.

The move came as the largest party is striving to stop the rise of Ahn Cheol-soo, the splinter party's standard-bearer for the May 9 election, who observers said poses a formidable challenge to its candidate Moon Jae-in.

"We will sternly deal (with the alleged irregularities)... For whom have such irregularities taken place?" Rep. Choo Mi-ae, the party's chief, said during a meeting with senior party officials. 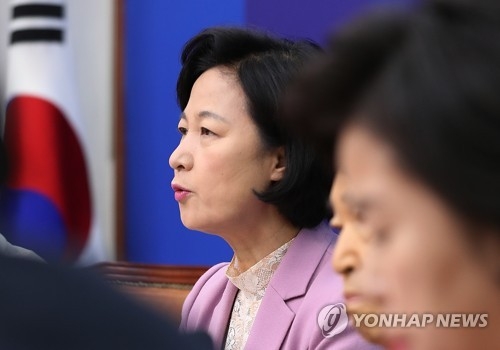 "If these were committed to draw attention to the primaries, the party is to be held accountable for them. If they were intended to back a certain candidate, it is the candidate who should take the responsibility," she said.

The election watchdog has recently filed complaints with the prosecution against three people who were accused of providing transportation and food to those who participated in the People's Party's primaries in Busan and Gwangju late last month.

The election law bans any provision of money, gifts or other financial assistance to voters.

Rumors have also circulated on social media that Ahn has mobilized gang members for his election campaign. A photo posted on the media showed Ahn flanked by stout men in black suits during a regional forum last month.

Ahn's party has dismissed the rumors as part of "negative campaigning" by his opponents.

Ahn has been at the center of political attacks as he has been quickly catching up with front-runner Moon.

The weekly survey, conducted this week by local pollster Gallup Korea, showed Ahn with a support rating of 35 percent, only 3 percentage points behind Moon who has topped the polls for more than three months. 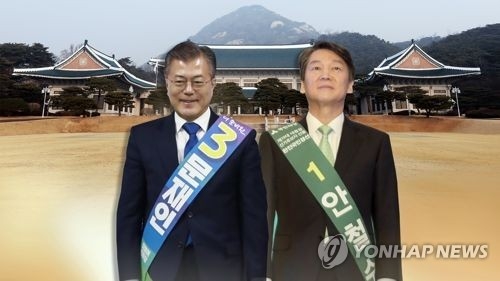 Meanwhile, Moon's camp decided to file a complaint with the prosecution against Rep. Shim Jae-cheol of the conservative Liberty Korea Party who has raised a series of allegations that Moon's son gained undue favors when he applied for a job at a labor ministry-affiliated agency in 2006.