SEOUL, April 7 (Yonhap) -- K-pop boy group 2PM will return to the stage as one of its members is quickly recovering from injuries he sustained while performing in February, its management agency said Friday.

JYP Entertainment said in a statement the six-member group will hold its concert "6Nights" six times from June 2-4 and 9-11 at Hwajung Stadium of Korea University in Seoul.

On Feb. 26, Jun. K fell off a moving vehicle while performing at Seoul Olympic Park, fracturing his right elbow and right ring finger. He received surgery and has been resting.

Because of the injury, the agency had canceled the remaining half of the group's concerts that were scheduled through the weekend.

The tickets for the upcoming concerts are available for purchase online beginning April 24 for fans and April 27 for the general public. 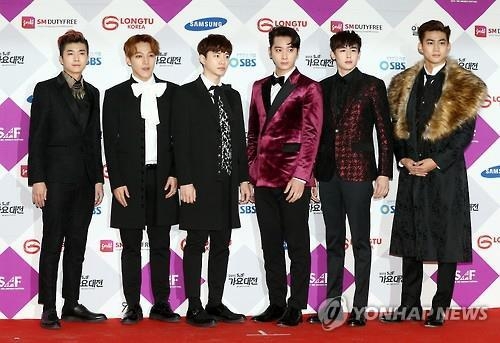