SEOUL, April 7 (Yonhap) -- South Korea football coach Uli Stielike will fly to Britain and Germany to check on his players and discuss issues related to the men's national team, an official with the Korea Football Association (KFA) said Friday.

"Stielike will depart for Britain today," said the KFA official, who asked not to be named. "He will meet with Ki and Son to have a deep discussion about the national team."

The 62-year-old German will then travel to his homeland to see Koo Ja-cheol and Ji Dong-won -- who both play for Bundesliga side FC Augsburg -- before returning to South Korea next week.

Stielike has been in hot water after his team fell 1-0 to China and had a nail-biting 1-0 win over Syria at home, with uninspiring performances last month. While angry fans here have called for Stielike's head, questioning his tactical acumen and selection of players, the KFA technical committee recently decided to keep him at the helm and promised to give more support to the national team.

The KFA said while Stielike is on his trip to Europe, the members of the technical committee will inspect local players in the K League, South Korea's pro football league, over the weekend.

South Korea are currently second in Group A in the final Asian qualifying round for the 2018 FIFA World Cup, where they compete with Iran, Uzbekistan, Syria, Qatar and China. 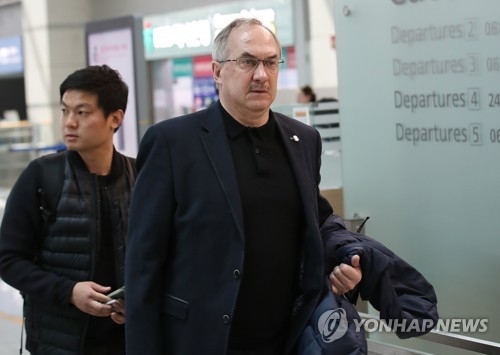