SEOUL, April 7 (Yonhap) -- South Korea's exports are expected to rise for the sixth straight month in April, according to the trade ministry Friday, as shipments of semiconductors, steel and ships are likely to show double-digit growth this month.

The upbeat forecast was presented at a meeting of officials at the Ministry of Industry, Trade and Energy, and representatives from 11 industry organizations earlier in the day.

Among the bright spots are ships, semiconductors, flat-panel displays, petrochemicals and steel, according to the ministry.

However, China's retaliatory actions against South Korean goods over the deployment of an advanced U.S. missile system in South Korea were cited as one of the major irritations for Korean firms.

China has taken a number of economic retaliatory measures, including restrictions on South Korean imports and a ban on Chinese tourists from visiting the neighboring nation. 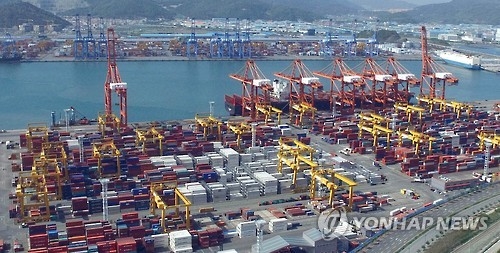