SEOUL, April 7 (Yonhap) -- Two leading presidential contenders on Friday intensified efforts to court centrist and conservative voters with their security-heavy schedules, as a poll showed them in an increasingly tight race in the upcoming election.

Moon Jae-in and Ahn Cheol-soo, the presidential nominees of the liberal Democratic Party and the center-left People's Party, respectively, for the May 9 election, visited security-related sites, including military units, amid growing nuclear and missile threats from North Korea.

For his first security-themed trip since his victory in the largest party's primaries Monday, Moon traveled to a memorial park for the fallen troops and national patriots in Hongseong, 157 kilometers south of Seoul.

In a visitors' book, Moon wrote, "(I) will build a Republic of Korea that is fair and righteous by upholding your noble spirits and sacrifices for our country." 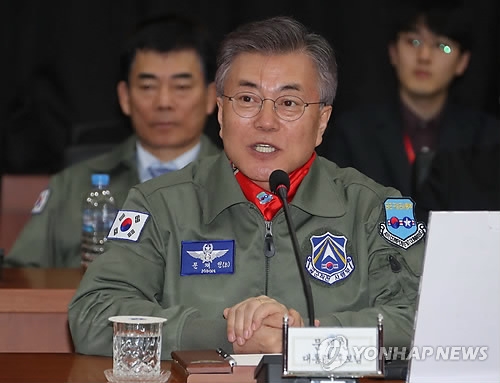 There, he warned the North that it would cross the "bridge of no return" should it continue to launch missile provocations or conduct yet another nuclear test.

Security has been cited as one of Moon's weaknesses as conservatives criticized his negative stance on the ongoing installation of a U.S. missile defense system and penchant for dialogue with an increasingly belligerent Pyongyang.

His visit to the security sites came just two days after the communist state fired a ballistic missile into the East Sea. The launch was the latest in a recent series of the North's provocative acts, including its high-thrust missile engine test last month.

Ahn also began his Friday schedule by visiting a unit of the Army's 17th Division in the western port city of Incheon. 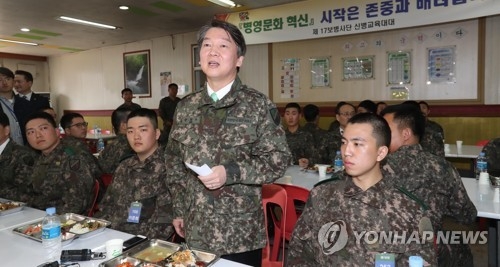 During a lunch meeting with Army personnel, the presidential hopeful pledged better state support for the health and safety of draftees.

Compared with Moon, Ahn is seen as more security-oriented as he has recently made remarks to respect the Seoul-Washington agreement to station the Terminal High Altitude Area Defense system on the Korean Peninsula.

During a forum a day earlier, Ahn said that security is the "basic foundation" of the country, trying to highlight the priority he places on security in his agenda.

With the popularity gap between Moon and Ahn quickly shrinking, the pair have been caught in an intense competition for centrist and right-wing votes, while their conservative rivals have been languishing in opinion polls with less than 10 percent support.