The North's leader sent the message to Syrian President Bashar al-Assad to mark the 70th anniversary of the creation of the controlling Ba'ath party, according to Rodong Sinmun, North Korea's main newspaper.

The move is seen to be aimed at showing friendly ties between Pyongyang and Damascus as about 90 people were killed by the Syrian government's suspected uses of chemical weapons Tuesday against a rebel-held area in the northern part of the country.

"The two countries' friendly relations will be strengthened and developed, given their fight against imperialism," Kim was quoted as saying by the newspaper.

North Korea has long been suspected of cooperating with Syria over nuclear programs.

The North has built a plutonium production reactor in Syria, though the facility was ultimately destroyed by an Israeli strike in 2007 before it became operational, according to Robert Gallucci, who negotiated a 1994 nuclear freeze deal with the North.

The U.S. launched a barrage of cruise missiles at an air base on Thursday night (local time) in retaliation for the latest chemical weapon attack for which Washington blames Assad. 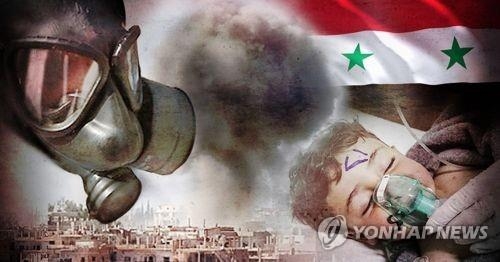