South Korean Jang Seul-gi scored the equalizer in the 76th minute after Sung Hyang-sim gave the hosts the lead in the first half at Kim Il-sung Stadium in Pyongyang, as the most anticipated contest at the Asian Football Confederation (AFC) Women's Asian Cup Group B qualifying tournament ended in a stalemate.

Both Koreas picked up their first draw at the Asian Cup qualifying competition following their victorious start. South Korea trounced India 10-0 in their opener on Monday, while North Korea previously routed India 8-0 and beat Hong Kong 5-0. 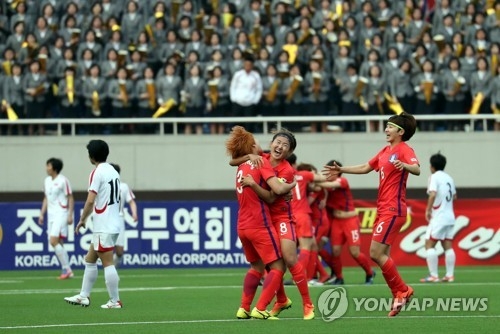 This was the first time that the two Koreas met in a competitive football match in the North's capital for either the men's or women's team. Including a friendly, South Korea last played in Pyongyang in 1990 when the men's national team suffered a 2-1 loss.

It was also the most important match for both Koreas in their bid to clinch a spot at the Asian Cup. They have been regarded as the top two contenders vying for the No. 1 position in Group B that also features India, Hong Kong and Uzbekistan.

Only the top finisher in the group will make it to the 2018 AFC Women's Asian Cup in Jordan. The eight-team competition also doubles as the qualifying tournament for the 2019 FIFA Women's World Cup in France, meaning any team except the winner in Pyongyang is automatically out for the women's showpiece event as well.

With the latest result, the fate of the two Koreas is likely to come down to goal difference or goals scored in Group B since neither the South nor the North are likely to lose to low-ranked competitors in their remaining matches and should each finish the qualifying tournament with three wins and a draw.

North Korea, three-time Asian Cup champions at No. 10 in the latest FIFA rankings, will play their final match with No. 42 Uzbekistan on Sunday. South Korea, 17th in FIFA rankings, are scheduled to face No. 65 Hong Kong on Sunday before meeting Uzbekistan two days later. 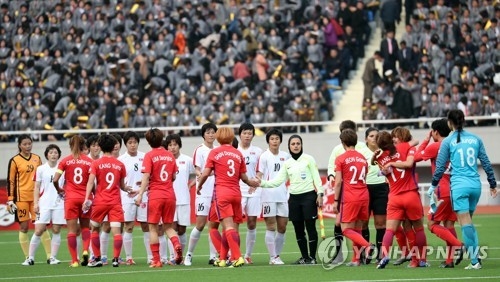 With some 50,000 North Koreans packing the stadium named after their country's founder, South Korea struggled to control the game and nearly gave up a goal just five minutes into the match.

North Korean forward Ri Kyong-hyang hit the post with her header in a messy scrum in the box, but referee Casey Reibelt later awarded a penalty to the hosts. South Korean goalkeeper Kim Jung-mi, however, denied Wi Jong-sim's spot kick.

Both sides were involved in a scuffle after Kim collided with North Korean players when vying for the ball after her penalty save.

South Korea tried to unlock North Korea's defense with Ji So-yun, the team's all-time leading scorer. In the 31st minute, midfielder Cho So-hyun fired a right-footed shot after receiving a pass from Ji, but it sailed over the net.

North Korea broke the scoreless deadlock in the third minute of the first half extra time when Sung Hyang-shim received a pass from Ri Kyong-hang and rounded goalkeeper Kim to score with her right foot.

Looking for an equalizer, South Korea made three substitutions in the second half and the Taeguk Ladies finally leveled the score in the 76th, when Jang Seul-gi's shot found the net after taking a deflection off a North Korean defender.

Seven minutes of added time were given to both Koreas, but neither scored the winner. 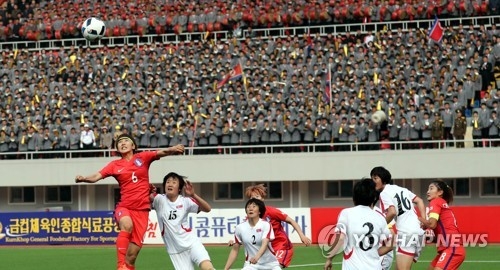 This was only South Korea's third draw against North Korea in 18 meetings, with one win and 14 losses. The South's only victory against the North came in 2005.

The football match, meanwhile, followed an all-Korean women showdown in hockey at the world championships south of the border. On Thursday, the South beat the North 3-0 at the International Ice Hockey Federation Women's World Championship Division II Group A event at Gangneung Hockey Centre in Gangneung, Gangwon Province.

It remains to be seen if these games on both sides of the border can ease strained inter-Korean relations, but the Seoul government has said the games are merely part of sports exchanges and no other form of meaningful dialogue is possible given current tensions.