Around 10 surveillance drones will be stationed at some division-level units of the Army and the Marine Corps, especially those that are responsible for general outposts (GOPs) and coastline defense, according to the defense authorities. The drones will reach units within the year.

It said some 20 additional drones will then be allocated to troops along the heavily fortified inter-Korean border by 2021. A newly developed unmanned aerial vehicle (UAV), manufactured by Korean Air, is known to be capable of detecting and tracking objects some 10 kilometers away. It's 3.4 meters long and 4.2 meters wide.

The machines are not only expected to help the South's military keep close tabs on North Korean troops but also make it easier to attack them in the event of a military confrontation.

The new observation platforms will moreover enhance the deterrent capability of South Korean troops. In the past the military depended mainly on thermal observation devices and other conventional equipment to check on the North's military close to the demilitarized zone (DMZ). 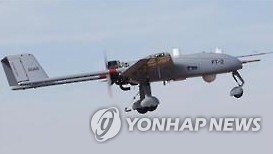