South Korea played to a 1-1 draw with North Korea at Kim Il-sung Stadium in Pyongyang, where the Asian Football Confederation (AFC) Women's Asian Cup Group B qualifying matches are being staged. North Korea first took the lead with Sung Hyung-shim's goal in the first half, but South Korean Jang Seul-gi scored an equalizer in the second half to save the visitors from a defeat.

"We got the result that we wanted," Yoon said after the match. "I think both sides played a good game and showed their talent."

This was the first time that the two Koreas met in a competitive football match in the North's capital for either the men's or women's team. Some 50,000 North Korean fans gave loud support to their national team, but Yoon said the South Korean players handled the pressure very well.

"We knew North Korea would get avid support from fans, but our players weren't intimidated by that," he said. "Our players said to each other that they should think North Korean fans were also cheering for them, and the players were able to finish the match well." 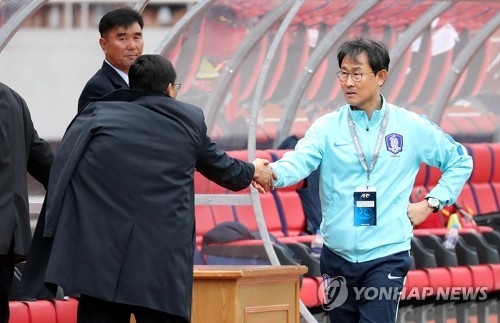 Prior to this match, South Korea had only one win, two draws and 14 losses against North Korea, but Yoon said he never thought about losing the match in the North Korean capital.

"Our players' concentration level was higher than at any other time in the past," he said. "I trusted my players."

The Koreas have been regarded as the top two contenders vying for the No. 1 position in Group B, which also features India, Hong Kong and Uzbekistan. Only the top finisher in the group will make it to the 2018 AFC Women's Asian Cup in Jordan. The eight-team competition also doubles as the qualifying tournament for the 2019 FIFA Women's World Cup in France, meaning any team except the winner in Pyongyang is automatically out for the women's showpiece event as well.

Before picking up their first draw at the Asian Cup qualifying competition, both sides had a victorious start. South Korea trounced India 10-0 in their opener on Monday, while North Korea previously routed India 8-0 and beat Hong Kong 5-0.

The fate of the two Koreas is now likely to come down to goal differences or goals scored in Group B since neither the South nor the North are likely to lose to the low-ranked competitors in their remaining matches and should each finish the qualifying tournament with three wins and a draw.

"As I said after the first match, every single goal is important," he said. "We will come up with an attacking strategy to score as many goals as possible in the next two matches."

Yoon, 56, is having his second visit to North Korea. He was a member of the men's national football team that played against North Korea in a friendly match in Pyongyang in 1990. North Korean women's coach Kim Kwang-min also played in the friendly.

"It just reminds me of old memories," he said. "I remember other North Korean players but it's a pity that I can't meet them."

"I think our players did well, but the result wasn't good," he said. "We missed the penalty early in the game, and our players were influenced by that."

Kim said his side could have done better if the players kept their composure in the second half.

"We didn't have good situations on both offense and defense," he said. "Our strategy was to put pressure on the opponents as much as possible and score fast with quick attack."

Kim said South Korea have kept their play style intact under Yoon, who took over the women's team in 2013.

"Compared to 2013, I think South Korea didn't change much," he said. "South Korea showed an organized performance because their players have been with the team for a long time."