South Korea gave up a goal to North Korea's Sung Hyung-shim in the first half, but managed to salvage a draw in the Asian Football Confederation (AFC) Women's Asian Cup Group B qualifying match after Jang Seul-gi scored an equalizer in the second half at Kim Il-sung Stadium in Pyongyang.

Prior to this match, South Korea had only one win, two draws and 14 losses against North Korea.

"I'm really proud of my teammates who held on until the end," said South Korean forward Ji So-yun. "Although we didn't win, it's still positive that we had a draw."

This was the first time that the two Koreas met in a competitive football match in the North's capital for either the men's or women's team. Some 50,000 North Korean fans gave loud support to their national team, but the players said they tried not to be distracted by the atmosphere of the stadium.

"The North Korean fans cheered so much louder than what we expected, so we couldn't hear anything on the pitch," said Jang, who saved the South Koreans from defeat with her goal. "We played with the mindset that North Koreans were supporting us." 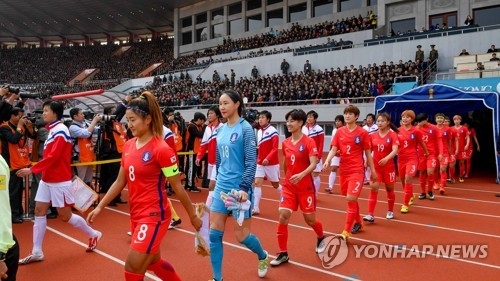 South Korea nearly gave up the lead to North Korea just five minutes into the match after they surrendered a penalty. But the South's veteran goalkeeper Kim Jung-mi denied Wi Jong-sim's spot kick that headed to the left bottom corner of the net.

"I asked the kicker whether she would strike to the left side, and that psychological battle may have worked well," Kim said. "It was also a brilliant move to practice stopping penalty kicks in yesterday's training."

Kim, who is the most experienced player on the squad with 108 caps, eventually gave up a goal to Sung, but the 32-year-old goalkeeper said she had faith in her teammates.

"After we conceded a goal, I told the teammates that it was all right," she said. "After we got the equalizer, the players were motivated and even our striker went down to stop North Koreas' attacks."

Only the top finisher in the group will make it to the 2018 AFC Women's Asian Cup in Jordan that also doubles as the qualifying tournament for the 2019 FIFA Women's World Cup in France.

Before picking up their first draw at the Asian Cup qualifying competition, South Korea trounced India 10-0 in their opener on Monday, while North Korea previously routed India 8-0 and beat Hong Kong 5-0. 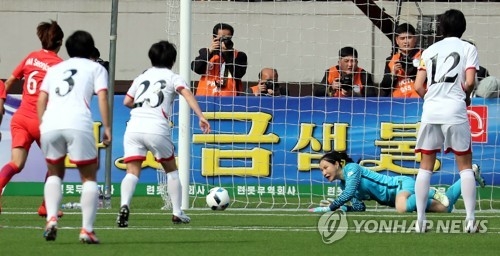