In their first summit talks that opened in Florida earlier in the day, Xi extended an invitation for Trump to visit China.

Trump accepted the invitation "with pleasure," and hoped to make the trip at an early date within this year, Xinhua News Agency said, quoting unidentified officials.

It did not provide a specific date for Trump's trip.

Speaking at a formal dinner, Xi was quoted as saying he hopes that China and the U.S. will expand cooperation in various sectors including trade, investment, diplomacy, cybersecurity and culture.

He also urged the two countries to manage differences and address sensitive issues in a constructive way, according to Xinhua. 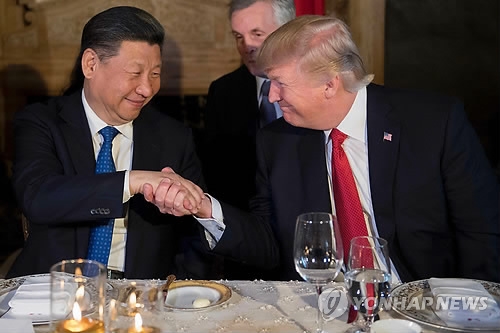 Trump said he had a good discussion in their first session, exchanging views on a wide range of issues, which helped develop a friendly rapport with each other.

Trump quipped that he had "gotten nothing" in the first round talks with Xi, with more meetings scheduled on Friday (local time).

North Korea is high on the agenda in their talks expected to set the tone for Washington-Beijing relations for the coming years.

The international community is paying keen attention to whether they will reach an agreement on ways to deal with Pyongyang.
(END)