WASHINGTON, April 7 (Yonhap) -- In the run-up to this week's first meetings with China's leader, U.S. President Donald Trump talked repeatedly and tough about how serious the problem of North Korea has become, even calling it a "humanity problem."

Trump also said it is "my responsibility" to tackle the North's nuclear and missile threats, declaring that the issue will be one of the two top priorities for his talks with China's Xi Jinping, along with reducing trade deficit with the world's No. 2 economy.

He also issued a thinly veiled warning that Beijing should help rein in the North, saying the U.S. would act alone otherwise. Trump spoke about the matter so repeatedly and emphatically that many media outlets even portrayed the meetings as a showdown of the century.

Compared with such pre-summit tough talk, however, what turned out from the 24 hours of meetings was bland.

The top American diplomat also said there was no "package arrangement" on the issue.

However, the talks produced progress in Trump's efforts to reduce the trade deficit with China.

Secretary of Commerce Wilbur Ross said that the two sides agreed to a "100-day plan" for trade talks aimed at increasing U.S. exports to China and reducing the trade deficit with the country.

"Expecting any big breakthrough announcements would have been a mistake. Hype is hype, but it was never in the cards that either leader would make the kind of compromises on the spot that would generate potentially significant criticism at home," said Alan Romberg, a top expert on China and North Korea at the Stimson Center in Washington.

Romberg said that it was obvious from the tone adopted by both leaders that they see more specific progress coming in the period ahead. In addition to the trade group the two sides agreed to set up, they could also establish other policy groups to flesh out the broad outline of agreements reached this week, he said.

"As Trump reportedly said, China will be 'stepping up' its activities regarding North Korea. That may prove to be nothing much. But at this point we need to wait and see what evolves in the coming months," he said. 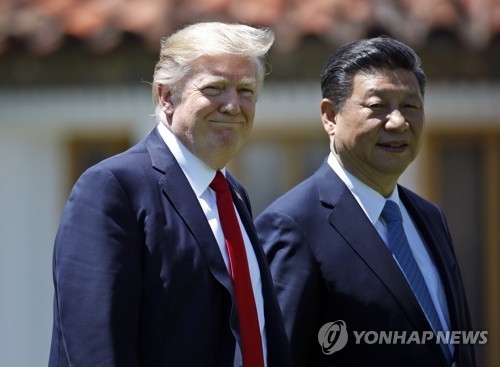 Analysts have cautioned against expecting too much from the summit with regard to the North, saying China is unlikely to agree to do what it has refused to do for decades: fully exercising its leverage as the North's main provider of food and energy to rein in the provocative regime.

Instead, they predicted that Xi could offer a package of "sweeteners" that Trump can tweet as victories.

"It should have been obvious In the White House pre-briefings, repeatedly lowering expectations and saying that this is about 'getting to know each other' that few concrete results would be achieved," Robert Manning, a senior fellow at the Atlantic Council.

Manning said that China won't go so far as to do things they fear would put Pyongyang's stability at risk.

Under the agreement to increase cooperation, however, Xi could jointly enforce sanctions, and instruct Chinese banks and front companies to stop doing business with North Korea, while tolerating U.S. secondary sanctions on small Chinese banks, companies or individuals that won't cause great pain to the country, the expert said.

"I would see this summit as just a first step in a recalibration of US-China relations, setting the tone and framework. How it plays out is uncertain," Manning said.

The lack of a breakthrough from the talks won't be seen as a setback for Trump as the talks have been nearly completely overshadowed by Thursday night's U.S. missile attack on Syria.