SEOUL, April 8 (Yonhap) -- Former United Nations Secretary-General Ban Ki-moon is set to leave for the United States on Saturday to lecture as a visiting professor at Harvard University, his aides said.

Retiring from his 10-year term as the U.N. chief at the end of 2016, Ban was close to launching his presidential bid in South Korea which was gripped by a massive corruption scandal involving former President Park Geun-hye.

But he announced in February that he will not run for the presidency after influence-peddling allegations involving his own relatives emerged. Ban, a former foreign minister, was previously viewed as a conservative presidential contender.

It is not known what message Ban would give to the pubic before the departure. There appears to be little chance of him giving any political message that may affect the May 9 presidential election, his aides said.

At a local forum in March, the former U.N. head said that South Korea needs to deploy an advanced U.S. missile defense system, known as the Terminal High Altitude Area Defense (THAAD), on its soil as planned.

"A powerful presidential hopeful claims that the issue of deploying a THAAD battery should be handed over to the next administration," Ban said, apparently targeting liberal presidential candidate Moon Jae-in. "This has given China an excuse (to strongly oppose the THAAD installment), making the situation tricky." 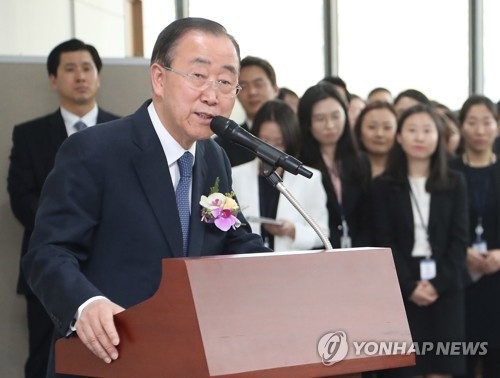