Ban made the remarks before leaving for the United States to lecture as a visiting professor at Harvard University. His assumption of the new role came as he announced in February that he will not run for the presidential election.

"I'm deeply concerned about the general public being divided ahead of the presidential election," Ban told reporters at Incheon International Airport, the country's main gateway.

Retiring from his 10-year term as the U.N. chief at the end of 2016, Ban was close to launching his presidential bid in South Korea which was gripped by a massive corruption scandal involving former President Park Geun-hye.

Ban was once viewed as an influential conservative contender, but he gave up his presidential bid after being dogged by corruption allegations involving him and his relatives.

He was also under fire from his political rivals and media due to controversial and sometimes mistaken remarks of his on key issues.

The former foreign minister called for national unity, asking for presidential candidates to not behave in a way that can further divide the public.

"I was also a victim of such (political) mudslinging," Ban said, calling on presidential contenders to not do that anymore.

Ban also expressed a positive attitude toward the post of a special envoy on diplomacy proposed by Ahn Cheol-soo, the presidential nominee of the center-left People's Party.

"I've read media reports and there was no prior consultation (on the issue)," he said. "My basic stance is that I am willing to play a proper role as a South Korean national, whoever will be elected."

He said that the biggest challenge facing South Korea's next president would be security concerns sparked by North Korea's nuclear and missile provocations. 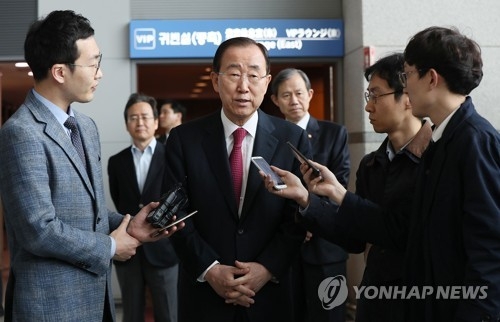