GANGNEUNG, South Korea, April 8 (Yonhap) -- North Korea closed out the women's hockey world championships south of the border with a 4-2 win over Slovenia on Saturday.

With the victory, North Korea avoided finishing in last place with two wins and three losses. The worst team at this tournament will be relegated to Division II Group B next year, and a loss Saturday would have sealed North Korea's fate as the last-place nation here.

This is the fourth-highest level of the IIHF World Championships, and the champion here will be promoted to Division I Group B next year. 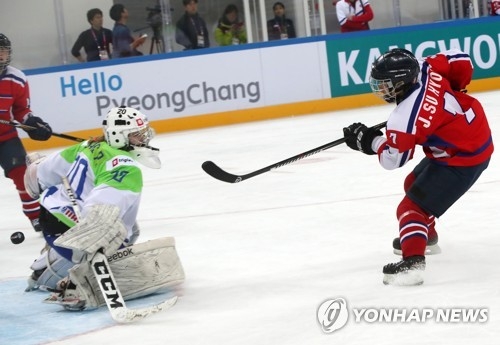 Also on Saturday, South Korea and the Netherlands will square off at 4:30 p.m. with the title at stake, while Britain and Australia will meet in the finale at 9 p.m. to see who will finish in last place.

With the win over the No. 24 Slovenia, North Korea, ranked 26th, has wrapped up a rare and much-publicized visit across the heavily fortified border.

The trip came amid rising tensions on the peninsula, and North Korea even fired a ballistic missile into the East Sea on Wednesday, the eve of the first all-Korea women's hockey match here.

North Korea enjoyed a huge following of South Korean supporters at every game in Gangneung.

Slovenia opened the scoring just 25 seconds into the game, before the North Koreans knew what hit them. After a seemingly harmless entry into the offensive zone, Eva Dukaric found herself all alone in the point-blank range and shot one past goalie Ri Pom.

Ri was promptly lifted from the game for So Jong-sim, who gave up Slovenia's second goal seven minutes later when Sara Confidenti tucked one just underneath the crossbar. It was only Slovenia's third shot of the game. 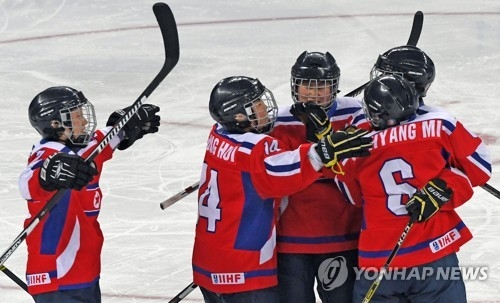 North Korea didn't lack for chances, but Pia Dukaric stood tall in the Slovenian net. The shots were 26-6 for North Korea in the opening 20 minutes.

North Korea finally cut the deficit in half at 6:41 in the second period with a goal by Kim Kum-bok.

Jong Su-hyon then knotted the score at 2-2 at 14:23. After a Slovenian turnover, Kim Hyang-mi started a two-on-one breakaway and fed the wide-open Jong for the equalizer.

North Korea completed the comeback five minutes into the final period, as Kim Un-jong poked home a rebound after Dukaric made a difficult stop.

Kim Kum-bok, team captain, rounded out the scoring with her second goal of the game at 18:14. She skated in alone on four Slovenians and fired a wrist shot to the top shelf past Dukaric for the insurance marker.