Prosecutors visited the detention house in Uiwang, south of Seoul, where Park was arrested at the end of last month following the Constitutional Court's approval of her impeachment on March 10. Saturday's questioning marked the third one in jail.

Park is known to have denied any wrongdoing during the first session in prison that lasted for nearly 11 hours on Tuesday. The second probe occurred two days later.

She is also suspected of colluding with Choi in pressing local conglomerates into donating tens of billions of won to two non-profit foundations allegedly controlled by Choi.

Lawyer Yoo Yeong-ha accompanied her during the inquiry Saturday, as he did previously.

A Seoul court has approved prosecutors' request to extend the detention of Park until April 19 for further questioning.

South Korea's justice ministry transferred Choi, who was held at the same location as Park, to another detention house earlier following the prosecution's request.

Meanwhile, prosecutors are considering seeking an arrest warrant against Woo Byung-woo, Park's former senior secretary for civil affairs, as early as Sunday, according to sources.

He is one of the last figures embroiled in the scandal that has avoided detention so far, while a number of Park's former aides were arrested and are standing trial. Woo was grilled on Thursday for about 17 hours as a suspect.

A team of special prosecutors which earlier investigated the scandal asked a court to issue a warrant to arrest Woo, but the request was denied. 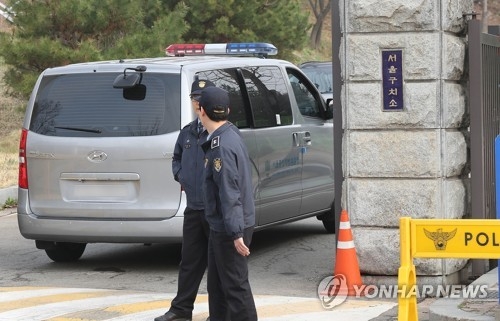