It took North Korea a late rally to defeat Slovenia 4-2 to close out the International Ice Hockey Federation (IIHF) Women's World Championship Division II Group A on Saturday at Kwandong Hockey Centre in Gangneung, Gangwon Province. With the win -- unimpressive for the most part -- North Korea just avoided finishing in last place in the six-nation competition and getting relegated to Division II Group B, a tier below this tournament, for 2018.

After withdrawing from the world championships in 2011, North Korea was relegated to Division III for 2012. It won the Division II Group A tournament that year to move up to Division I Group B and stayed there until 2015, when it finished last at the worlds and faced relegation to Division II Group A again.
North Korea is now sitting at 26th in the IIHF rankings, and even that position seems generous given the country's performance south of the border over the past seven days. 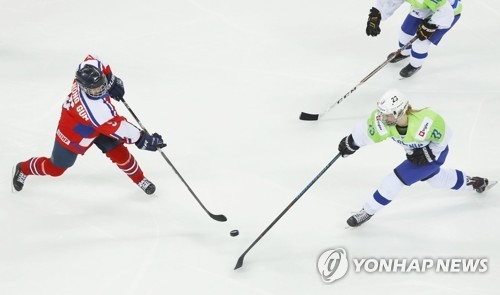 North Korea opened the tournament with a 2-1 loss to Australia, the lowest-ranked team here at No. 28. It then blew a 2-1 lead and ended up losing 4-2 to the Netherlands.

The 3-2 overtime win over the 21st-ranked Britain provided a rare shining moment for North Korea, which was shut out 3-0 by South Korea in a hyped-up showdown on Thursday.

And North Korea beat Slovenia by a pair in a game that should have been more lopsided.

North Korea gave up the first goal just 25 seconds into the game, as its defense was caught napping and Eva Dukaric skated right in on goalie Ri Pom for an easy score.

Ri was promptly taken out of the game for So Jong-sim, who allowed a goal on just the second shot she faced at 7:34 in the period.

North Korea kept peppering shots at Pia Dukaric in the Slovenian net. North Korea scored twice in the second period to pull into a tie, and went ahead for good early in the third period.

North Korea dominated the Slovenian zone after going down early but lacked a delicate touch around the net to take full advantage of that edge.

The inability to finish around the net was the recurring theme at this tournament. 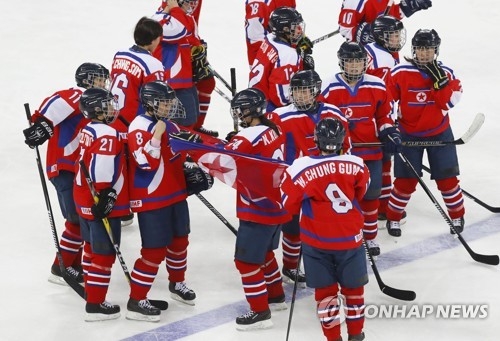 Head coach Ri Won-son relied heavily on his top two lines, which only exposed his team's lack of depth.

The top six forwards did most of the damage on Saturday, too. Kim Un-hyang, Jin Ok and Choe Jong-hui on the first line had 21 shots combined, while Kim Hyang-mi, Jong Su-hyon and Kim Kum-bok on the second line put 25 shots on the net. These six also took 56 of the team's 60 face-offs.

Players on the third and fourth lines have played quite sparingly and have been virtually invisible in the few minutes that they've been on the ice.

Kim Nong-gum and Won Chol-sun logged heavy minutes as the top two defenders, and they've played in every situation -- even-strength, power plays and penalty kills. They could hold their own on defense and jump in on the attack when needed, but there was only so much the two rearguards could do on a team without much help from elsewhere.

This was far from a well-coached team, and North Korea will likely be another dogfight for survival in Division II Group A next year.