GANGNEUNG, South Korea, April 8 (Yonhap) -- South Korean players rejoiced over their women's hockey world championship on Saturday, but they didn't lose sight of a bigger goal amid the celebration.

South Korea shut out the Netherlands 2-0 to capture the International Ice Hockey Federation (IIHF) Women's World Championship Division II Group A at Kwandong Hockey Centre in Gangneung, Gangwon Province. With five consecutive wins, South Korea, world No. 23, will be promoted to the next tier of the IIHF championships, Division I Group B, for the first time.

Forward Han Soo-jin scored both goals to cap off the impressive run to the title, the second of them coming on a power play in the third period. South Korea netted 21 goals to lead the pack and allowed just three, the fewest in the tournament. Its power plays were also the best of the tournament, with a 33.33 percent success rate on nine goals in 27 chances, and South Korea killed all of its 13 penalties.

South Korea also ended up as the only team with two shutouts, the first one coming as a 3-0 win over North Korea on Thursday. South Korea also never trailed in this tournament. 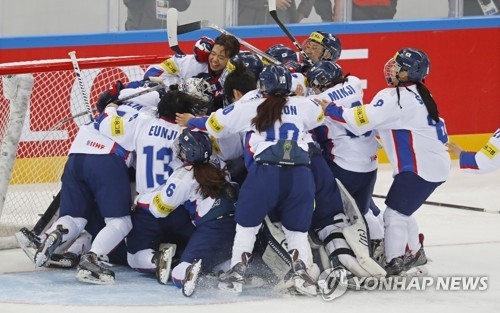 "I've never experienced anything like this before," said Han, a 29-year-old who has gone through some lean years with the national team when it often lost by double digits. "I thought I'd cry once we clinched the championship, but I felt surprisingly calm. I guess I didn't want to shed tears in front of my younger teammates."

South Korea's next big tournament will be the biggest of them all -- the 2018 PyeongChang Winter Olympics on home ice. South Korea received an automatic spot as the host, and the 23rd-ranked team will take on three top-10 nations: Sweden, Switzerland and Japan.

"The world championships and the Olympics will be completely different," Han said. "In terms of our strength and skills, we have to get better."

Randi Griffin, a naturalized half-Korean forward born in North Carolina, said the players' mental fortitude should help take the team to the next level.

Goalie Shin So-jung, the usual No. 1 netminder who missed the first four games here with a knee injury, said winning the championship was a huge confidence boost. 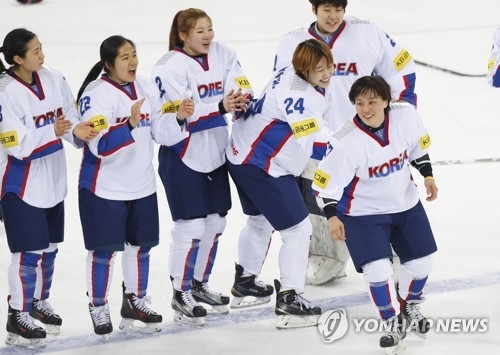 "I think our collective confidence has grown as we've been playing more games," Shin said. "We beat China at the Asian Games and battled Japan hard (in a 3-0 loss). We used to give up a ton of goals early but now we're able to get on the board first. I think we'll be heading into the Olympics with a lot of confidence."

South Korea is so far behind its three Olympic opponents in the world rankings that a victory may be asking too much. Shin admitted South Korea's objective at the Olympics has been to allow as few goals as possible. After Saturday's world championship, Shin said, "I think we'll shift our focus and try to win a game at the Olympics." 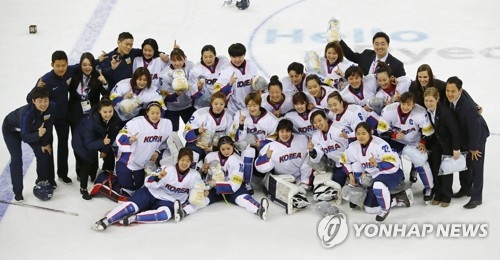