MOKPO/SEOUL, April 9 (Yonhap) -- The South Korean government said Sunday the salvaged Sewol ferry has been moved onto land, embarking on the final stage of the transfer nearly three years after its sinking.

The salvage team has moved the ship onto a dry dock at a port in the southwestern province of Mokpo, from the semisubmersible transport ship as of 1:00 p.m., the Ministry of Oceans and Fisheries said.

The work started earlier in the day after completing the final test for the transfer operation, which involves some 600 module transporters carrying the wreck to lift and move the vessel carefully to the ground.

The ill-fated ferry sank off the country's southwestern coast near Jindo Island in April 16, 2014, leaving 304 people dead. Nine victims have yet to be recovered.

The process to safely anchor the ship on land is expected to take at least a whole day since the module transporters move very slowly to keep the balance of the weight, the ministry said.

Separately, a rescue team of some 31 divers has been sent to the site of the sinking in search of any remains of the missing victims.

The wreck was raised from the seabed late last month and moved on a semisubmersible ship to the port in Mokpo on March 31. Due to water and mud, the 6,800-ton ferry is estimated to weigh around 17,000 tons at present.

The government said the whole loading process is likely to end around 10 p.m., or by early Monday morning. 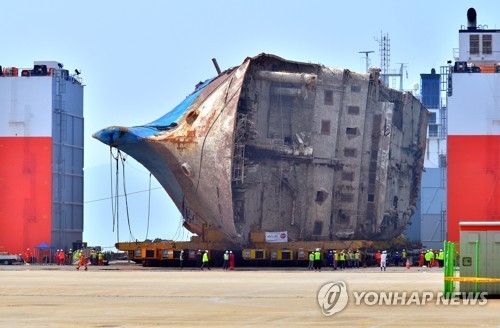