SEOUL, April 9 (Yonhap) -- Leading presidential contender Moon Jae-in maintained his view Sunday that the incoming administration should have the final say on the controversial deployment of a U.S. missile defense system in South Korea.

Moon, the nominee of the liberal Democratic Party, made the remark in an interview with Yonhap News Agency in reference to the Terminal High Altitude Area Defense (THAAD) battery that is being installed in southeastern South Korea. China claims it is a threat to its security, and recently stepped up economic retaliation against Seoul. 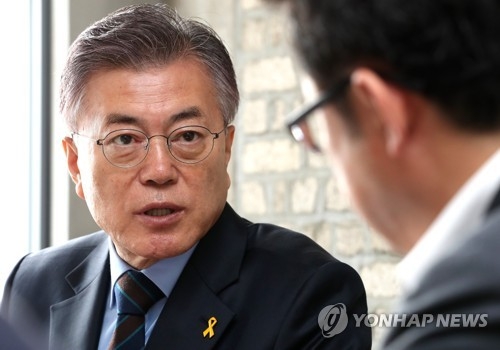 "My position hasn't changed," Moon said. "The basic purpose of the THAAD deployment should be to solve the North Korean nuclear issue, but THAAD is simply a defensive measure against North Korean nukes and not a method to fundamentally scrap them."

The nominee criticized his biggest rival Ahn Cheol-soo of the centrist People's Party over what he called an about-face on the issue. Ahn, who has emerged as a formidable challenge to longtime frontrunner Moon, opposed the deployment before recently arguing that a president has a duty to uphold an agreement between states. Critics accused him of shifting position in an attempt to win the conservative vote.

"(Ahn) changed his position politically to gain the support of the corrupt class with vested rights who are seeking to extend their administration," Moon said, referring to the conservative government of Park Geun-hye who was removed from office last month over a corruption scandal.

He argued that if Ahn's logic holds, he should have said the 2015 South Korea-Japan deal on "comfort women" should also be honored. The agreement to resolve the issue of Japan's wartime sexual enslavement of Korean women has been widely rejected here, including by many of the victims.

Moon vowed to address China's retaliation over THAAD as one of top priority issues if elected on May 9. He also promised that if the deployment decision is left to the next administration, he would first start work to freeze Pyongyang's nuclear program and eventually see it dismantled.

Moon's views on security issues have often been cited as his key weakness. Many conservatives fear he would be too lenient toward North Korea and his remark last year that he would visit North Korea before the United States if elected invited strong criticism.

"Everyone agrees that traditionally, our ally the U.S. is the most important," he said. "But friendly ties with Japan are also important, as are ties with China. Now I believe we should greatly enhance diplomatic ties with Russia too."

THAAD deployment decision should be left to next administration: Moon

THAAD deployment decision should be left to next administration: Moon